Home Archives Profile Subscribe
Radical Transparency: Revelation, Reputation and Reciprocity
Oriah and Buber, I and Thou: Bringing All Of Who I Am to Blogging 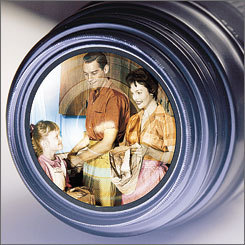 USA Today ran an interesting front-page article on Monday about Marketers Take a Close Look at Your Daily Routines, detailing some of the ways and means that companies have employed to better understand the everyday use -- and potential use -- of their products. Much of the article focused on the monitoring tools and techniques used in market research, but what I found most interesting was the motivations of those who agree to be watched, which I would summarize as mattering (or, at least, wanting to matter [more]).

The article describes a number of examples of market research:

I suspect the fact that this article was published on the first day of the ACM Conference on Human Factors in Computer Systems (CHI 2007) -- that I'm attending (and will blog about later) -- is entirely coincidental. CHI is one of the premier venues where companies who are willing to be open about their research present and/or demonstrate their innovative tools and techniques for gaining consumer insights. Microsoft has a significant presence here, but I can't say that I've encountered anyone from any of the other companies listed in the USA Today article, and it was difficult to track down references to most of the systems and sites listed in the article -- the photo to the left was from a Brandweek article on the Consumer Vision System -- and those companies don't appear to have [m]any unsanctioned externally facing blogs, or otherwise score high on the radical transparency scale ... even though they are, in effect, inviting their customers to be partners ... but I digress.

What I found most interesting about the article is a topic I've blogged about before: mattering. Microsoft offered free pizza and a free computer to the participants in its observation studies, Nissan paid its participants $50 for their time and efforts, and I'm sure the other companies offer participants some kind of financial or other tangible reward for their service. But what really mattered was mattering. Having some influence on the development of products and services is a significant motivation for those who agree to be monitored. The family observed by Microsoft affected the decision to rename "tools" to "folders" in Vista; a woman whose car was photographed by Nissan helped persuade Nissan to add more storage compartments (front seat CD holder and trunk separators) in its 2007 Sentra.

In addition to these examples of direct influence, I also suspect that simply being the subject of a study -- being videotaped, interviewed or otherwise being the object of focused attention -- also feeds people's natural desire to feel like they matter. This is probably a big factor in the popularity of YouTube, Flickr and other social media sharing sites ... including blogs ... er, including this one, which, despite my originally articulated goal of blogging for myself as a form of practice, does occasionally gain some attention ... and I will admit that I enjoy [that] attention ... I just don't want to be driven by it.

In The Four Agreements, Don Miguel Ruiz talks about how we humans get "hooked on attention" at an early age, and how that desire for attention is what renders us susceptible to "domestication" -- subsuming, and in some (many?) cases even submerging, our dreams, desires and delights in order to please others (rather than our selves). I regularly struggle with issues of acceptance, interdependence and the tension between wanting to be true to myself and wanting to please others (especially those who are important to me). I suppose that one of the appealing aspects of mattering through monitoring by market researchers is that subjects are asked, insofar as possible, to simply be themselves and go about their daily activities, so that new products and/or services can be better designed to support those activities. Seems like a mutually beneficial arrangement to me.