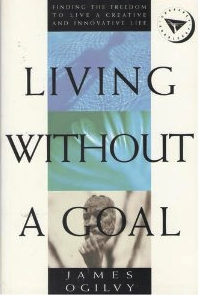 God and Marx are both dead. Relativism has dethroned absolutism. In our postmodern world, how do we create meaning in our lives now in the absence of externally defined Grand Goals? In Living Without a Goal: Finding the Freedom to Live a Creative and Innovative Life, author James Ogilvy encourages us to adopt a more playful attitude toward life and work, letting go of our attachments to outcomes, and giving ourselves permission to explore the frontiers of our bliss. Drawing upon a wide-ranging set of disciplines, including religion, politics, philosophy, psychology, science, art, architecture, economics, linguistics and semiotics (among others), Ogilvy questions our compulsion to fill the void created by the disappearance of religiously and/or ideologically inspired Goals with “personal pretensions to destinies”.

I’ve owned this book since it was first published, in 1995, and although I bought it with the goal of reading it, never quite got around to it. I resurrected that goal after attending (and blogging about) a presentation on Goal-Free Living” by Stephen Shapiro last year, but to no avail (and I admit I have not read Shapiro's book, either). Two weeks ago, in a series of discussions about what our research team mission statement ought to look like, the question arose whether it ought to represent a unifying Goal or a more pragmatic assemblage of individual goals. I was championing the former, but aspects of the discussions were bringing to mind a vague memory of Ogilvy's book, and his stipulation that "Living without a Grand Goal while orchestrating many goals offers opportunities for free choice, design, intelligence, play" ... the kinds of opportunities we want to cultivate in our project.

I initially intended to blog more about "working without a Goal", but as this time of year is often a rather dark and deeply reflective one for me, I've decided to focus on the ways I'm interpreting and applying Ogilvy's precepts outside of the work context. One of the most jarring passages in the book was the claim that

when you try to identify the use of your entire life, you are asking to be used.

When I read this passage, I was immediately reminded of the very different (and personally more inspiring) sentiment expressed by George Bernard Shaw:

This is the true joy in life, the being used for a purpose recognized by yourself as a mighty one; the being a force of nature instead of a feverish, selfish little clod of ailments and grievances complaining that the world will not devote itself to making you happy.

I am of the opinion that my life belongs to the whole community, and as long as I live it is my privilege to do for it whatever I can.

I want to be thoroughly used up when I die, for the harder I work the more I live. I rejoice in life for its own sake. Life is no "brief candle" for me. It is a sort of splendid torch which I have got hold of for the moment, and I want to make it burn as brightly as possible before handing it on to future generations.

Ogilvy distinguishes between Goals and goals, the former having "the nobility and mysteriousness of God" and the latter helping to organize activities and getting things done. He rejects the single-minded life-long pursuit of an overarching Goal, through which we sacrifice our freedom, while embracing the opportunistic adoption of smaller-scale goals that we may adopt as we artfully create ourselves in real-time.

Many aspects of the book resonate with my deeply held beliefs, e.g., his preference for appreciation over manipulation, and affective sensitivity over instrumental rationality, focusing more on "sublime", "spontaneity", "creativity" and "marginal intensity" and less on "material", "efficiency", "productivity" and "marginal utility". Ogilvy's emphasis on an artistic and entrepreneurial approach to life (and work) are closely aligned with ideas championed in some of my other favorite books, e.g., The Ultimate Anti-Career Guide by Rick Jarow and The Art of the Start by Guy Kawasaki. His invitation for "goofing on the precious self" reminded me of Bill Buxton's warning at CSCW 2006 about the danger of precious ideas ... and I can see that one of my precious ideas is the idea of my "self" ... and that I often take my self [too] seriously.

Getting back to me (and it's all about me), and my difficulty with the rejection of Goals, I acknowledge my attachment to my own personal sense of mission (“helping people relate”), which feels more like a Goal than a goal. I believe my awareness of this mission arose more as a process of self-discovery – simply noticing where my natural passions and joys are most keenly felt – rather than a top-down imposition of what I ought to be doing. Ogilvy praises Jean-Paul Sartre's observation that "Man is a useless passion", and I recognize that part of my joy in being an irrepressible connector is that my passion is useful (to others).

So perhaps the core of my resistance here is this desire to be useful to others. Recently, in a post [explicitly] devoted to self-disclosure, I noted that I am an irrepressible people-pleaser, and I have known for a long time that many of my challenges stem from an inner conviction of worthlessness, that I am only valuable insofar as I am valued by others. Lately, I have not been feeling very useful (or valued), which is why I am willing to plunge a bit further into the depths of this issue. While focusing on "helping people relate" has enabled me to transcend the darkness of my own self-image, it has, up until now, not enabled me to transcend the pitfalls of [my perception of] others' perception of me. In articulating his concept of narcissism degree zero, Ogilvy himself notes that "self-love must finally spread itself across the social pattern of reflections that constitute the self".

I can't honestly say I'm entirely willing to release my attachment to others' [expressions of] appreciation at this moment -- despite the opportunities for practicing such detachment currently being offered me -- but I'm at least willing to re-open the question of whether and how I matter ... and if it is possible to matter without being [acknowledged as] useful to others.