Computer Supported Cooperative Whatever: Reflections on Work, Play and Passion at CSCW 2006

As I reflected upon the reflections that were offered during the ACM Conference on Computer Supported Cooperative Work (CSCW 2006) last week -- and some of my notes on CSCW 2006 -- a promiment theme that emerged [for me] was the tension between professionalism and playfulness. The conference, which celebrated its 20th year anniversary this year, had its genesis in -- and continues to be dominated by -- the study of work practices, and the design and deployment of technology to support those practices, with an aim toward helping organizations achieve more efficient use of their human resources. There are, of course, other goals for collaborative technologies, and while I was glad to see a slightly increased focus on computer supported cooperative play (Bonnie Nardi's and Scott Counts' presentations, which I noted yesterday, stand out in this dimension), most of what I saw were very professional presentations of very professional research on very professional contexts into which professionally designed and developed technologies have been or might be inserted. There was something else missing from many of these presentations, but I couldn't put my finger on it ... until I caught up on some of my reading of Kathy Sierra's blog: passion. The field's focus on work is certainly well-founded-- many of us spend many of our waking hours (and some of our sleeping hours) working, and thus understanding whether and how technology can help us work more effectively is an important and useful pursuit. However, I believe that individual and group efficiency sometimes comes at the cost of enjoyment (Tom DeMarco, in his book, Slack, has far more to say about enjoyment, engagement, effectiveness and efficiency in the workplace).

When the first conference was first convened in 1986, collaborative technologies were far more expensive (relatively speaking) than they are today, and so workplaces were the primary settings for their deployment. However, as personal / mobile / ubiquitous techologies proliferate, they are increasingly being used outside of traditional workplaces ... or used inside of workplaces for activities that are not traditionally considered work.

A quick perusal of the proceedings suggests that 40 of the 62 papers from the conference were focused on work, 5 focused on play, and the remainder being focused on the home, or [aspects of] collaborative technology that could be applicable in work or non-work contexts. There was a panel scheduled on CSCW and Games Research, but this was (unfortunately) cancelled. Googling for computer supported cooperative play turned up three papers, none of which was presented at a CSCW conference:

In response to a question of "Why is this CSCW?" following one of my favorite presentations of the conference (on a study of World of Warcraft), Bonnie Nardi replied that "we decided last time [CSCW 2004] that CSCW is about play, too". Well, FWIW, Elizabeth Churchill and I decided that CSCW 2002 was going to be about play, too -- we half-jokingly described CSCW as Computer Supported Cooperative Whatever in our informal calls for participation at ECSCW 2001 and elsewhere, and arranged for an invited performance and panel on computer supported cooperative theatre (where, of course, the play's the thing) -- and the call for participation for CSCW 2000 included "entertainment" in its list of application areas. Still, change comes slowly, and despite these decisions and calls, and the explosion of the use of technology in supporting activities not typically associated with work, there has not been a parallel increase in the coverage of computer supported cooperative play -- or playfulness -- in the papers presented at CSCW.

I think this is due to several reasons. One is the the growing "professionalism" that Judy Olson observed in her presentation at the panel on "Twenty Years of CSCW - What Have We Learned?" (although as I noted earlier, she also provided -- or played -- one of the most playful episodes of the conference: a hilarious Prairie Home Companion skit on Linda Wertheimer struggling to communicate over a telephone link with a remote correspondent). Scientific professionalism -- and professional science -- is not always the most conducive environment in which to explore, much less promote, play ... although I recently saw Jonathan Keats present, and model, a playful approach to science [and art] ... and Bill Buxton, in the closing plenary for CSCW 2006 quoted Albert Einstein as saying "the most important ingredient to science is play" ... leading me to wonder if perhaps the difference is in the profession (or presentation?) vs. performance of science.

Another factor may be the source of funding for this research. Most of the companies supporting CSCW research[ers] -- including several of the sponsors of the conference -- sell technology products and services to [other] companies for supporting collaborative work conducted by their employees. While there is a growing awareness of the importance of a curious and playful attitude in performing innovative work -- Doug Rushkoff's book "Get Back in the Box: Innovation from the Outside In" being my favorite exposition on this theme -- I believe that many employers still view work and play as incompatible. Perhaps Blizzard Entertainment will sponsor future research in computer supported cooperative warcraft (though this also sounds like an area that would be appealing to DARPA).

A final factor I'll note on the topic [here] is the difficulty in measuring enjoyment.  While I noted a few techniques for measuring happiness in an earlier post on The Art, Science, Business and Politics of Happiness, techniques for measuring worker and workgroup efficiency are more mature and prevalent than those for measuring enjoyment ... and in a field grounded in empiricism, if you can't measure something, it doesn't exist ... though I sometimes wonder if there is an inverse correlation between ease of measureability and interestingness. 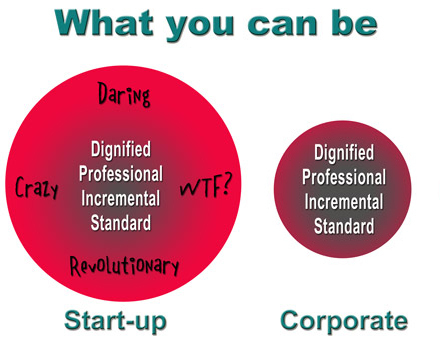 And, speaking of inverse correlations ... Kathy Sierra recently shared some words (and images) of wisdom on the tension between professionalism and passion in recounting a recent episode where two simple words of passion -- f***ing cool. Kathy first channeled the insights of Kevin Broidy about the desired user response to his products:

I don’t want their reaction to be a measured, rational, dispassionate analysis of why the product is better than the alternatives, how the cost is more reasonable, feature set more complete, UI more AJAXified. I don’t want them to pause to analyze the boring feature comparison chart on the back of the box.

I want that pure sense of wonder, that kid-at-airshow-seeing-an-F16–on-afterburners-rip-by-so-close-it-makes-your-soul-shake reaction, that caress-the-new-Blackberry-until-your-friends-start-to-question-your-sanity experience. I want an irrational level of sheer, unfiltered, borderline delusional joy.

After which Kathy notes:

But "f***ing cool" is not a "business appropriate" phrase. It's unprofessional.

I did not hear any exclamations of "f***ing cool" during CSCW last week. There was little passion evident in most of the paper -- or panel -- presentations at the conference. There were a few sparks of passion during the Demonstration and Interactive Poster Reception (Carl Gutwin and Marty Moore stand out in that dimension), and Bill Buxton was passionate during his closing keynote, but during much of the rest of the conference, professionalism reigned supreme.

I hope future CSCW conferences will include more passionate presentations by passionate researchers who are studying, designing and/or deploying technologies that help spark the passions of their users.