Home Archives Profile Subscribe
The Newest Member of the Family: A Bearded Dragon
Johathan Keats on Art, Science and Religion

I had lunch at Illusions Fayrouz Dining and Entertainment Club yesterday, and when I used the men's room after the meal, I discovered a set of small, currently inactive, display units above each urinal.

The web site listed on the display unit, www.eyespyadvertising.com, is "currently under construction" and I can't find any other information out about the company on the web. The manager of the restaurant told me that the units were working for a while a few months ago, showing 15 - 30 second videos (primarily advertisements) in a 15 minute loop, with the content being downloaded via a [wired] Internet connection.

I'm reminded of the EZ Show Network, which originally planned to deploy a digital signage network encompassing 500 convenience stores in the Pacific Northwest. They encountered formidable logistical challenges -- technically and in the sale cycle -- and recently changed ownership -- and business plans -- and are now focusing their deployment efforts on university bookstores.

I would not be surprised if Eye Spy Advertising encounters similar challenges, and I hope I will eventually get to see the system in action ... but meanwhile, this gives me a pretext within which to ruminate a bit about a topic of great, if somewhat prurient, interest to me: urinal-based display marketing, a niche within the larger area of captive micro-audience marketing.

I have encountered a variety of urinal-based displays -- interactive and non-interactive, low-tech and high-tech -- over the years. Shown below are photos of a chalkboard "interactive display" and a static display. 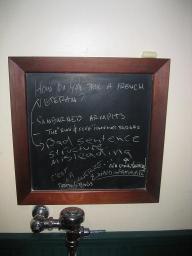 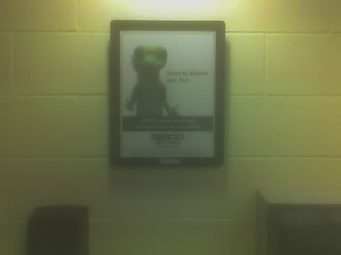 One of my favorite examples of this concept was the You're In Control (urine control) project at MIT Media Lab, an interesting blend of technology, sociology and culture: 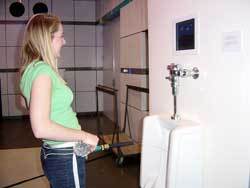 The You’re In Control system uses computation to enhance the act of urination. Sensors in the back of a urinal detect the position of impact of a stream of urine, enabling the user to play interactive games on a screen mounted above the urinal.

While urination fulfills a basic bodily function, it is also an activity rich with social significance. Along with the refreshing release it provides, the act of micturition satisfies a primal urge to mark our territory. For women who visit the bathroom in groups and chat in neighboring stalls, urination can be a bonding ritual. For men who write their names in the snow, extinguish cigarettes, or congregate around lampposts to urinate, urination can be a test of skill and a way of asserting their masculinity.

Then, of course, came a multi-player version of this engaging concept, On Target, designed by Marcel Neundörfer (via Yanko Design): 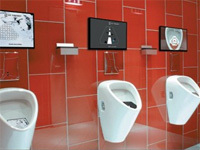 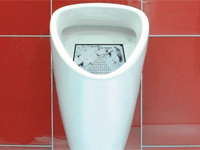 Recessed into a urinal is a pressure-sensitive display screen. When the guest uses it, he triggers an interactive game, producing images and sound. The reduced size of the “target” improves restroom hygiene and saves on cleanings costs (like the “fly in the urinal” at Amsterdam's Schiphol Airport). It also makes a trip to the urinal “fun and games” – more than just a necessary nuisance. By projecting the game experience into the public space, viewers are treated to a new way of visualizing the abstract, and the entertainment value is boosted. The projection of the project into a museum space was conceived of as a critical-ironic measure, questioning the concept of art, but extending it at the same time. “On target” is an interactive installation with the functional purpose of improving hygiene.

I remember encountering a photo of another example of a multi-player, or at least multi-station, system of urinal-based displays ... unfortunately, while I downloaded the photo of the installation, I did not note the source. 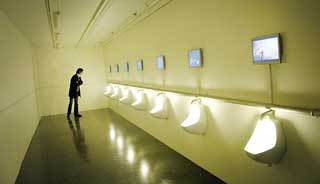 The manager at Illusions said while Eye Spy Advertising offered the restaurant a slot in its content rotation, the company did not offer the restaurant any revenue sharing options (unlike the earlier business plan for EZ Show Network, which did include a small cut for the convenience store operators). He also said that while people (well, men) came back from the men's room talking about the brands that were advertised on the displays (e.g., a Smirnoff ad), he didn't think that the ads actually influenced any purchase decisions.

I don't know whether Eye Spy Advertising will ever get its units up and running again (sorry, couldn't resist), but I look forward to a future in which I have something more interesting to look forward at, and perhaps interact with, during men's rooms visits.

[Update, 2008-01-09: Michael's comment prompted me to return to Illusions to see whether/how the Eye Spy Advertising displays are working - they are currently working, cycling through five ads (photos below).] 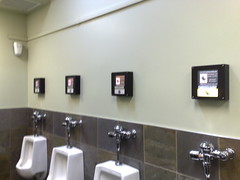