There appears to be rising indignation in Digg nation over the perception that some users have undue influence in the ranking of articles posted in this popular "user driven social content website" (cf. articles at InformationWeek, Wired Blog, and Wikipedia, the last of which also notes that "diggnation" was one of the names originally considered for the site).  Any registered Digg user can add an article to the Digg news pool, and any Digg user can rate that article: digg it, which increases the rank of that article in the pool, or bury it (along with the justification: duplicate, spam, wrong topic, inaccurate, or lame), which decreases it's rank.  Articles that receive enough diggs appear on the front page, and their placement on the page is based, in part, on Digg user rankings (other, undisclosed, elements are included in the Digg ranking, presumably including recency of votes).  Users can also blog about, email or comment on articles, as well as rate others' comments with a thumbs up or thumbs down (and the ranking algorithm may also take some of these factors into account).  And, users are encouraged to invite their friends to join ... which is, in part, the source of the current controversy.

In a recent blog post, Digg the rigged?, jp shared some observations, statistics and analysis about how a small group of Digg users was responsible for a large number of front page articles (Jacob Gower had earlier raised similar issues on ForeverGeek).  jp reports patterns of digging by a small group of friends that quickly promote articles up the front page, and while he acknowledges that Digg is a "true democracy", he notes that, in practice, a "small aristocracy" appears to wield disproportionate influence over the system. 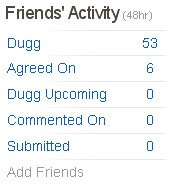 The Digg user interface includes a summary of friends' activity over the past 48 hours, including counts of the stories friends have dugg, agreed on (stories that more than one friend dugg), dugg upcoming, commented on and submitted. [The screenshot from the left is from Wikipedia -- I don't have any [Digg] friends.]  It's easy to imagine how friends might naturally check to see what their friends have dugg, and if they share similar interests, they would be likely to digg the same articles, so this disproportionate influence may simply be an innocent instance of the network effect ... or, more specifically, Metcalfe's law, which states that the value of a network is proportional to the square of the number of its members.

However, it's also to imagine how a group of friends may intentionally "game" the system. I'm reminded of an incredibly insightful presentation on Putting the Fun in Functional, given at eTech 2006 by Amy Jo Kim, Creative Director at Shufflebrain, that I read about at we-make-money-not-art.  Amy Jo highlights five key elements that can make online games engaging to the point of addiction -- collecting, earning points, feedback, exchanges and customization -- and notes how many online social networking services (e.g., MySpace), exhibit all of these elements ... and thus may be considered games, broadly speaking (contributing to my own sense of the growing pervasiveness and permeability of games worlds).  Digg exhibits these five elements, and so it would hardly be surprising if some users -- and groups of users -- would make a game of promoting news and infotainment.

Kevin Rose recently announced some changes in the Digg ranking algorithm that are intended to promote diversity, through differential weighting of diggers' influence based on how diverse their diggs appear to be.  I see this as an attempt to shift from a pure democracy to something more of a meritocracy, where behavior deemed undesireable is penalized, whether that behavior is intentional or uninentional.  This shift may address some of the concerns, however, I suspect that if the gaming is, indeed, intentional, then the gamers will find a way to accommodate this -- perhaps a network of networks of friends that can help each other diversify via pseudo-random diggs.

Years ago, my colleagues and I at Accenture Technology Labs confronted similar issues regarding how best to allocate influence over a shared resource.  We were designing a system, MusicFX, to enable people to influence the music played in the fitness center while they were exercising.  The system offered fitness center members the opportunity to create a profile of their musical preferences based on a 5-point scale, indicating whether they love, like, don't care, dislike or hate each of 91 different genres of music (via DMX).  As each person entered the fitness center to workout, they badged in to identify themselves, and their preferences were added to the pool from which the "best" music would be selected.

We witnessed some gaming of the system shortly after deploying the system at the Accenture Technology Park fitness center (where it continued to run daily for over 4 years, until Accenture sold the building in 2001).  On the first day, one user used the interface kiosk we setup in the center to change his rating of the genre that was currently selected from "don't care" to "hate" (similar to the "bury it" rating in Digg).  This had the effect of a veto, given the way we had configured the algorithm weights at the time, and the station was immediately changed.  The user repeated this process a few more times until he had vetoed the stations he didn't like, and the algorithm had settled on a station he did like; then he went back to working out again.  That night, we changed the settings to ensure that no one could wield veto power.  The next day, this user called his friends in the fitness center over to demonstrate his new-found veto power, and was rather chagrined to discover that the system no longer responded so instantly and dramatically to his preference changes.

We considered a variety of elaborate weighting schemes to try to achieve greater diversity, both respect to the different musical preferences of the members and the variety in music genres selected.  We setlled on simply introducing a weighted random selection operator that would select one of the most popular genres, but not [always] the top rated one; this provided greater diversity without the additional complexity in the algorithm -- or in the models users had about how the system worked.  At one point, in our near-obsessive concern over fairness, we went so far as to design a market-based version of MusicFX, where we setup virtual emotional bank accounts for each user, and devised a system through which virtual money would be transferred from the accounts of users who liked or loved the music that was being played to the accounts of users who disliked or hated the music being played.  We instituted regular bidding cycles in which virtual agents for the users would bid on music genres, where the cost of the genre was based on its popularity; over time, people who had outlier preferences would eventually accrue enough capital to outbid the people with more "normal" preferences, and get to hear their music.  In simulations, we found that the market-based version resulted in a more equitable distribution of "wealth" (where wealth = listening to music you like or love) as compared to the non-randomized regular version, but when the smidgen of randomness was added to the regular version, there was not much difference in equitability.  When we considered the potential negative impact on the overall fitness center population to occasionally hearing genres that most people hated, we decided not to implement a real-life trial of the market-based system ... the trade-off between conducting good science and maintaining good service (for a deployed system).

Anyhow, I mention all of this, not only because MusicFX was one of my favorite projects (I could spend pages and pages telling more stories about our experiences with the system), but also because I think some of those lessons may apply to the current challenges Digg faces in reallocating influence among its population of users.  I think that if they overly complicate the model, it may turn off some of their regular users, who won't know why their diggs don't seem to count for much anymore, and anyone who is intent on gaming the system will find a way to do so.  The changes run the risk of harming the "innocent" without accomplishing the goal of effectively deterring the "enemy", though Digg nation would certainly not be the only nation in which ineffective overreactions to low probability threats are taking place.