Chicago at the Chateau (A Concert Review)

The band Chicago put on a surprisingly strong -- but surprisingly short (one hour, forty minutes) -- show last night at Chateau Ste. Michelle.  Approximately 3,800 people came out to enjoy the music, wine and fabulous weather at the winery. 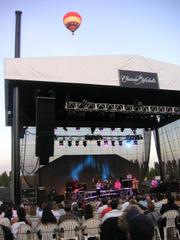 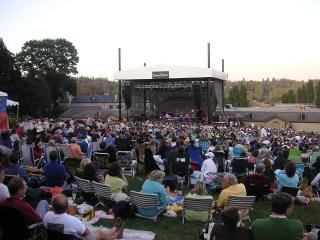 I don't think I've attended another concert where so many people were singing so many of the songs -- nearly every song became a sing-along, and during one (Just You 'N' Me), the band stopped singing for a while and just let the audience take it away. 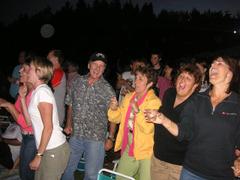 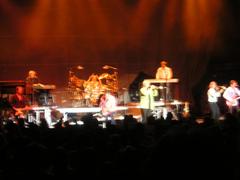 Chicago played the first concert I ever attended, in 1975, at the Saratoga Performing Arts Center, with my mom and my cousin TJ, so a Chicago concert has a special place in my heart, especially an outdoor one.  They were my favorite band thru their first 9 years, but three things happened in 1978 to color my perception of the band: Terry Kath, their amazing founding guitarist, killed himself; their producer, James William Guercio, left; and the Chicago XI album did not measure up to the high standards I expected of them (it was the last Chicago album I bought ... well, except their Chicago Group Portrait CD box set, but box sets don't count).

The band members -- and concert performers -- in 1975 were the seven founders plus the conga player who joined the band for Chicago VII:

In 2006, the band has four of the original members, but only two were on tour (or at least, at the concert last night):

I was really impressed by how well the new Chicago was able to recreate the sound of the classic Chicago, with that incredible blend of innovative instrumental jamming and crisp precision.  Even the singing was pretty strong, with Jason Scheff stretching to reach some of the high notes that Peter Cetera used to sing with such ease.  I was a bit disappointed in some of the liberties that Keith Howland took with Terry Kath guitar solos ... the solo for 25 or 6 to 4 was the first one I ever mastered when I was teaching myself guitar, and so his deviations from this classic solo probably bothered me more than most.

Unlike the recent CSNY concert at White River Amphitheatre, or the CSN concert at Chateau Ste. Michelle in 2004, I did not keep track of the song list for this concert.  This was due, in part, to my hands being full for much of the evening with a glass and/or bottle of wine and/or a plate of food (I was thinking how the food and drink probably diminished the number of people clapping at this and other concerts at Chateau Ste. Michelle).  Anyhow, scanning through the songs listed on my Group Portrait box, I remember them playing the following songs (though not in this order, except for the Make Me Smile ... Colour My World sequence):

Having been energized by the strong protest theme at the CSNY concert (on their aptly named "Freedom of Speech" tour), I was wondering whether there would be a resurgence of some of the protest flavor of early Chicago songs, written during the time of the Vietnam War.  Some of their songs during the period have a strong anti-war message (e.g., It Better End Soon or A Song for Richard and his Friends), but Unlike CSNY, I don't get the sense that Chicago is feeling particularly revolutionary these days.  Fortunately, they did play one of my favorite political songs, Dialogue, which, when I heard it this time, reminded me of some of the dialogues in my favorite political cartoon, This Modern World. I'll finish this post off with the song's inspiring refrain: