Home Archives Profile Subscribe
Revolution: the Business and Brand of Sustainability?
Passion and Purpose in Living, Loving, Learning and Leaving a Legacy

Hearts and Minds, Us and Them, War and Peace

Curtis Johnson shares some insightful -- and potentially inciteful -- views on new ways of thinking about -- and acting on -- the issue of terrorism in an article entitled "Towards Effective Global Influence".  After starting off with a quote from Marine Lt. Gen. Wallace Gregson

"Hearts and minds are more important than capturing and killing people"

Curtis notes the "obsessive reversions to what they know and understand" typically followed by the United States' Defense Department and State Department (and indeed, almost every organization I've ever known), and highlights three key weaknesses in current strategies:

He goes on to propose a "robust, integrated, strategic relationship strategy ... requiring deliberate, thoughtful, and costly study; sober reflection; humility; and a flexibility in policy and mindset " ... actions that are extremely challenging for any organization -- or individual, for that matter -- to apply.

Curtis' own organization, the Advanced Concepts Group of Sandia National Labs, is a rather unique collection of individuals who "think different" and thrive on challenging conventional wisdom in a variety of domains that in some way affect the health and/or security of the nation.  Central to Curtis' critique is the prevailing us vs. them (or, perhaps, U.S. vs. them) perspective that appears pervasive among the policymakers in the U.S. government.  Curtis points out that there are many who are neither with us nor against us (yet), and therein lies the opportunity to influence, rather than control, opinions of the moderate majority.  By employing hard-nosed, single-minded, pure-push attempts to control the relationships we have with [people in] other countries, we risk further alienation, isolation and and retaliation.

I came upon Curtis' article after reading about a workshop on "The Warfare System and Beyond" led by Sam Keen, in which he helps participants recognize, and [hopefully] reverse, the tendencies of people, tribes and nations to dehumanize our enemies.  This reminded me of one of the ACG's focus areas, Future of Warfare, and a "think-fest" they held on the topic recently; one of their observations was that "control is illusory and short-lived" ... a point which Curtis significantly expanded upon in his article.

Personally, I think that Web 2.0 and The Wealth of Networks offer very promising emerging technologies, ideas and models for addressing the problems that Curtis raises.  Unfortunately, given the natural organizational tendency toward "obsessive reversions to what we know and understand", these new trajectories may not be welcome at the Departments of Defense or State, or even Sandia National Labs (though perhaps more welcome at the relatively free-thinking Advanced Concepts Group).  Of course, it's also a question of priorities, and whether the powers that be really want to embrace the hearts and minds of people and achieve real peace, or continue in a state of perpetual war.

Update: Gene Becker has a recent post that reminds me that at least one government agency is willing to implement a "pull" (vs. push) model of interaction: 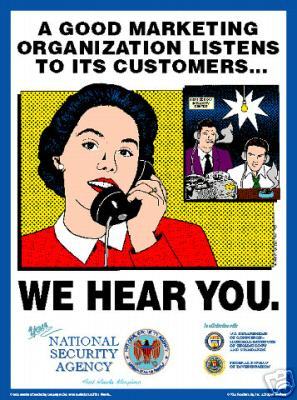