Home Archives Profile Subscribe
The Karma of Kindness: Unattributable and Inexplicable Generosity vs. Reciprocity
The Dance of Leadership

CSNY vs. GWB at WRA (A Concert Review)

Crosby, Stills, Nash and Young rendered a rousing rock and roll revue that combined retrospection with rekindled rebellion at the White River Amphitheatre last night.  While I don't believe U.S. President George W. Bush was physically present at the concert, representations of him -- including his words and actions (and their consequences) -- were front and center through music (from Neil Young's latest album, Living with War) and video and audio clips (interspersing Bush, U.S. soldiers in uniform and in coffins, Iraqi citizens and a tickertape-style list of various statements and statistics regarding Bush and the war in Iraq [aside: Wired recently ran an article about raw videos from Iraq]). 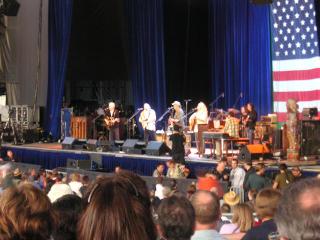 This was the third "CSN and sometimes Y" concert Amy and I have seen in the last two decades, including a CSN concert in the mid 80s and CSN at CSM (Chateau Ste. Michelle) two years ago.  Without doubt, it was their most energetic and powerful performance -- they are, at their core, a protest band, and they have more fodder now than in over 30 years.  The music -- old and new -- was inspired and inspiring, and I believe that Neil Young's presence, in addition to the current U.S. administration policies, helped to fire up the band (and the audience).

The music spanned a spectrum, from the heavy, electric, rock and roll guitar thunder of the first set -- punctuated by numerous dueling solos between Stephen Stills and Young -- to softer, more intricate and even exquisite, acoustic guitar and piano-based melodies that predominated much of the second set -- where the different numbers and combinations of singers and harmonies evoked a sense of rapture ("Guinnevere", by David Crosby and Graham Nash, stands out on that count).

One shortcoming in my concert experience was the band's choice not to more thoroughly engage the audience.  The only things they said between songs during the first set were "Hi" and "Thanks for coming", and though they seemed to loosen up a bit in the second set -- starting with Young stopping Nash midway through Our House (after Nash played a bad chord and muttered [something like] "Ack!" in between verses, Young stopped the song, and said "Let's play that song again") -- they still didn't say too much about the stories behind the songs, didn't provide many opportunities for sing-alongs, and didn't try very hard to incite the audience toward action (I was surprised not to see any tables outside the amphitheatre where people could sign up for activism ... and I was also surprised that water bottle caps were confiscated at the entrance, due to concern that people may throw them as projectiles onto stage).

Of course, CSNY's music itself is tremendously engaging, and some of the songs are pretty inciteful (I'm thinking particularly of "Let's Impeach the President").  Toward the end of the concert, they did invite us to join a sing -- and clap -- along, for "What are Their Names", and after playing the Jimi Hendrix version of the Star Spangled Banner from Woodstock, during which a giant microphone was brought out on stage and a yellow ribbon was tied around it, they tipped the microphone -- dimly shown in the photo below -- toward the audience to encourage us to speak up (against the madness). 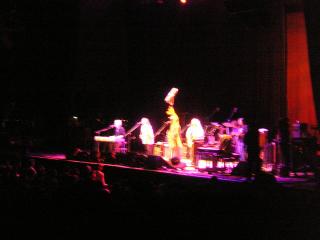 Another sequence of symbols -- backdrops of different flags at different times in the performance -- was largely lost on us, as we were at the far back [right] corner of the front section, and so couldn't see them (Buzz Person's official concert photos captured many of these flags, as well as better images of the giant microphone ... and everything else, for that matter).  However, being in that corner did enable us to make a quick exit, a tremendous advantage about which I'll say more below.

The playlist for the concert included the following (a modified sequence of what the Minneapolis - St. Paul Star Tribune posted after an earlier concert there):

Speaking of getaways, this was our first visit to the venue, and we were concerned about some of the things we'd read about transportation to and parking at White River Amphitheatre on blog posts and comments at Pleasing to Remember and LeeLeFever.com.  We followed the directions provided at RiverGiver.com, leaving Woodinville at 4:00, taking SR-520 to I-405 to SR-169 and cutting across SE 400th Street, and arriving around 6:00 (we were stuck in horrendous traffic on 520 and 405, so we would probably take West Lake Sammamish Parkway to I-90 to I-405 next time).  I don't know what time the parking lot opened (the gates opened at 6:30 for an 8:00 show), but we got there early enough to get good parking spaces, and were driving away on SE 400th Street within 10 minutes of the end of the concert, and back home in 1.5 hours.  On a somewhat related note, the selection of wine and beer is surprisingly poor (e.g., cans of Miller Genuine Draft and wines in a box), given my experience at other large venues in the Pacific Northwest (e.g., Safeco Field), and the price is high (around $7), so we didn't buy anything there ... and, in fact, will always plan to eat and drink elsewhere for any events at WRA.

Returning to the initial thread, despite my disappointment over the band's suboptimal overall engagement and specific rendition of Woodstock, this was a great concert, and even though it represented a significant investment of money and time (compared to concerts at Chateau Ste. Michelle, which are only 10 minutes away), it was a rare, and valued, opportunity to see CSNY in full force ... and I hope they (we?) can have as much impact on the political and societal problems of today as [I believe] they did when they first rose to fame, nearly 40 years ago.