Home Archives Profile Subscribe
A Lion in the House, Tears in my Eyes: On Cancer, Courage, Honesty and Generosity
The Health of Nations: Inequality, Stress and Dissatisfaction 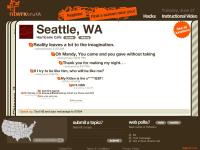 Sean sent me a link to the Wiffiti blog last week, and I was immediately intrigued with this new twist on an interactive display in a "third place".  Users can send text messages to a large plasma display installed in a restaurant or bar via mobile phone (SMS) by specifying the screen identifier.  Real-time approximations of what is showing on the real screens -- the most recent 10 messages (the real screens show the most recent 100 messages, as best they can) -- in four locations are shown at the ntwrk truth site.  One of these locations is local, the Hurricane Cafe, and I decided to test it by sending a message, and after a few minutes, it appeared on the screen (a screenshot from ntwrktruth -- taken today, after I sent "Reality leaves a lot to the imagination", a John Lennon quote -- is shown on the left).  The web site also provides for the capability to "Submit a topic" (not sure what this means) and participate in a web poll (current poll: "Best mode of flirtation? IM / text message / Old school phone call" -- curious that "face-to-face" was omitted). 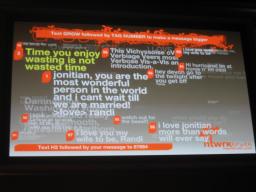 I wanted to experience Wiffiti in situ, so I went down to the Hurricane for dinner that evening.  There were only about ten people in the restaurant section, where the screen is mounted opposite the counter.  I sat at the counter, ordered the blue cheese burger and waffle fries, and watched the animated display, where the text messages slowly migrate around the screen, presumably to attract attention and prevent "burn-in".  No new messages appeared, so I sent a new one (highlighted in yellow in the photo on the left: "Time you enjoy wasting is not wasted time", a Bertrand Russell quote).  No other messages appeared, although most patrons -- individuals and groups -- appeared to be paying regular, if intermittent, attention to the display. 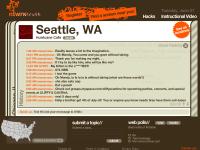 The ntwrk truth site includes a capability to see a history of the 100 most recent messages sent to the display, with the times they were posted.  The Hurricane is open 24-hours, and the real-time screenshots do not appear to be adjusted for time zone (e.g., my message was sent at 8:22am PST, but was marked as 1:22am in the history list), and there is no date shown in the history log, so it's hard to know exactly when activity is taking place, or how long the gaps are between messages (minutes, hours, days, weeks?).  However, based on the time codes and the interplay between the contents of some messages, it appears that activity tends to be bursty.  From a perusal of the log, it appears that most of the topics are location-specific -- referencing the Hurricane food, facilities, staff and/or [other] patrons -- though some appear to be location-agnostic -- expressing hopes, fears, dreams and disappointments, along with more mundane observations -- following patterns I've observed in the use of physical graffiti.

Wiffiti is a StreetMessenger application produced by LocaModa, whose intended benefits for site owners include sponsorship and advertising revenue generated via the displays.  The Wall Street Journal has reported on the challenges that MySpace faces in drawing advertisers, due to the sometimes unsavory content posted by MySpace users.  Although Wiffiti appears to have some filtering, there are still implicit and explicit references to people, objects and activities that appear in the history list ... messages that advertisers may not want to be associated with.  This is, of course, one of the reasons that interactive billboards typically don't show text messages sent by users, but rather respond to them in pre-defined, carefully controlled, ways.  Part of the appeal of MySpace -- and Wiffiti -- is that people are relatively free to express themselves. Given the tension between freedom and security, it is not clear that either platform will be able to simultaneously please its users and its [prospective] sponsors ... bringing to mind a quote from Benjamin Franklin:

Anyone who trades liberty for security deserves neither liberty nor security.

I think I'll send this to the Hurricane.

Posted at 10:29 AM in Places and Spaces, Public Displays, Web/Tech | Permalink | 0 comments