Home Archives Profile Subscribe
Social Entrepreneurship at NWEN: Doing Well by Doing Right (via Flexcar)
A Lion in the House, Tears in my Eyes: On Cancer, Courage, Honesty and Generosity

An Inconvenient Truth, and a Call to Action 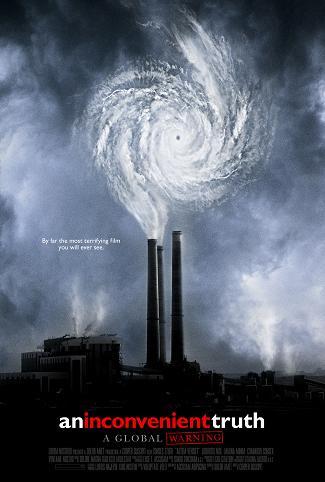 For Father's Day, our family went to see An Inconvenient Truth, a movie I wanted to see ... and wanted my children to see.  In the film, Al Gore poignantly highlights many of the disturbing impacts of global warming, including natural disasters, droughts, sea level rise, epidemic illnesses and species extinction.

Gore makes a compelling case for the need to take action, and identifies some of the factors that have impeded action, including denial, despair and disinformation (e.g., by George W. Bush's chief of staff for the Office of Environmental Quality -- and former oil lobbyist -- Phil Cooney ... the term "weapons of mass obfuscation" comes to mind).  He cites a survey in the journal Science on The Scientific Consensus on Climate Change which sampled 928 journal publications that dealt with "climate change" and found that none suggested there was any disagreement on whether human activities are negatively affecting the Earth's atmosphere.  A sample of newspaper and magazine articles found that 57%  suggested there was disagreement about whether humans were impacting global climate change ... reminiscent of another topic of great import in which many members of the press seemed to favor administration viewpoints over all others.  It seems as though we are living in a time of many inconvenient truths.

Gore argues that global warming is not simply an environmental or political issue, but a moral one, about which we have to take action ... and soon.  The film concludes with a number of actions we can take to reduce global warming, and he shows how the cumulative effects of the proposed actions can reduce CO2 emissions to below 1970 levels by the year 2050.

Anyone who lives in Washington State can also take action by supporting renewable energy through signing the petition -- and/or collecting others' signatures -- for ballot initiative I-937.  Another action is to encourage others to see the film -- so if anyone is reading this, I recommend that you see this film ... and take [more] action(s)!

[Updates, 06-Jul-2006: Seth Borenstein at the Associated Press reported that the nation's top climate scientists are largely confirming the accuracy of the movie (Wikipedia has a more extensive entry detailing the facts), but President Bush has said he will not see the movie and his EPA Administrator, Steve Johnson, has not found the time to see it either ... not that this administration has shown a particular predilection for facts, especially not inconvenient ones.  My biggest concern about the movie is that only people who are already concerned about global warming will see it and/or be influenced by it.  A politically conservative friend of mine, who I otherwise have great respect for, said he wouldn't see the movie because he's heard it's "just fearmongering" ... which I find odd, given that the current administration traffics in fear, and he is a supporter.  My fear is that the increasing polarization of the American political landscape will diminish prospects for influencing anyone who doesn't already believe in the problem of global warming ... and it seems odd to even be referring to faith vs. reason on a topic about which so much science is known.

On a more positive note, we collected enough signatures to put the I-937 renewable energy referendum question on the Washington State November ballot!]

[Update, 2006-07-10: Dan Gilbert, author of Stumbling on Happiness, has posted a blog entry on An Inconvenient Truth, entitled It's the End of the World as We Know It and I Feel Fine, which includes a copy of his LA Times op-ed article on If Only Gay Sex Caused Global Warming.  The article lists four factors that make help explain why more people aren't more concerned about global warming:

Al Gore addresses the last three points in the film, but I don't believe that anyone would fill the role for the first point Dan Gilbert raises.  The impending harm is largely due to mass unconsciousness, and despite my misgivings about the numbers of people who aren't already conscious -- and concerned -- about global warming seeing the film, I do hope that Gore's film will help to promote consciousness and concern.  As Gilbert notes:

Global warming is a deadly threat precisely because it fails to trip the brain's alarm, leaving us soundly asleep in a burning bed.  It remains to be seen whether we can learn to rise to new occasions.]

[Update, 2006-08-06: Much more eloquent pessimism about the prospects for Al Gore and his message in An Inconvenient Truth are provided at Whiskey Bar, which includes a broader range of threats:

But if extinction, or a return to the dark ages, is indeed our fate – or our grandchildren’s fate, anyway – I think it will be a Hobson’s choice as to which cultural tendency will bear the largest share of the blame: the arrogant empiricism that has made human society into an instrument of technological progress instead of the other way around, the ignorant prejudices of the masses, who are happy to consume the material benefits of the Enlightenment but unwilling to assume intellectual responsibility for them, or the cynical nihilism of corporate and political elites who are willing to play upon the latter in order to perpetuate the former, which is, after all is said and done, their ultimate claim to power.