The Proper Way to Enjoy an Espresso ... and a Cafe 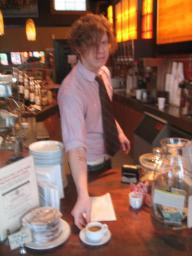 I stopped by the original Caffe Fiore (in north Ballard) yesterday afternoon for a double shot of espresso, and was treated to a double shot of expert advice about the right way to drink an espresso ... and the right way to enjoy a café.  As Jon, the barista, was preparing my drink, he asked whether I wanted to enjoy it "the proper way" as he was reaching for a ceramic espresso cup -- suggesting with a raised eyebrow that a paper "to-go" cup would be improper.  I nodded, and he went on to tell me that there is not only a proper way to make and serve espresso, there is a proper way to drink it -- proper meaning "the way they do it in Italy" -- which is to down it in one shot, 8 to 10 seconds after it is served, when the crema is at its height and the temperature is perfect.

Of course, I wanted to experience the espresso properly, and so I tried this method, and I agree that it was a fabulous taste sensation, with the flavor filling my mouth and lingering long afterward, with the kind of subtle shifting of flavor perception I typically associate only with wine.  I have [in the past] tended to sip my espresso, trying to prolong the experience, and yet I have often recognized that after the first sip or two, the drink cools and the flavor and texture is diminished.  I remember being told as a child that the proper way to eat spaghetti, i.e., the way they do it in Italy, is to use a spoon along with a fork in order to "cup" the pasta as it is twirled into a bite-size ball. So now I have a more proper (or more Italian) way of enjoying both spaghetti and espresso.

Interestingly, Jon's advice is very much in keeping with a review of Caffe Fiore's Sumatra:

When hot, a robust, full-bodied dark roast with a pleasantly rough character: chocolate and wine tones in the aroma, in the cup a hint of fruity ferment and musty earth. As the coffee cools, however, the musty earth tones turn bitter and weigh oppressively on the cup.

After I downed my espresso at the counter (no time to carry it back to the table ... which helps explain the prevalence of espresso bars in Italy), I sat down and opened up my laptop, noting aloud to Jon and another customer who had just walked in that there was an access point labelled "Metro King County".  They told me that some Metro King County buses are now offering WiFi and so I was probably picking up the access point of a passing bus.  This, then, led to a discussion about the use of WiFi in cafes, and both of the conversants expressed disdain for the way that WiFi-enabled laptop users have encroached on the social atmosphere some of their favorite coffeehouses ... including the other Caffe Fiore, recently opened in Queen Anne (the Ballard cafe does not offer WiFi).

I have observed -- and written about -- the social impact of WiFi in cafes, and can see both the costs and the benefits.  Using a laptop does seem to diminish one's approachability more than the reading a book or newspaper, and yet, some people seek out third places such as cafes not for conversation but to enjoy the social experience of being alone in a crowd.  I often seek out cafes expressly for the ability to check my email when I'm traveling between local meetings (and a drip coffee or espresso, depending on the time of day).  The problem seems to be related to the proportion of laptop users ... and, of course, how much time -- and money -- they (er, we) spend.  Trevor, a friend and former colleague -- and also a social person who also enjoys using WiFi in cafes -- once suggested that the ideal ratio of laptop to non-laptop users is approximately 1:2 ... enough so that he doesn't feel awkward being the only laptop user, but not so many that the clickety-clack of the keyboards overcomes the hubbub of conversation.

I did [eventually] find a web site for Caffe Fiore, but in googling around, I discovered that the Seattle Weekly notes that at the Queen Anne cafe, "free Wi-Fi keeps the low-key corner cafe lousy with laptops and gossip on weekday afternoons" [although I wonder whether this article contains a typographical error, where "lousy" was intended to be "busy", given that another description of Caffe Fiore in Seattle Weekly refers to "the pleasantly chic and relaxing atmosphere" ... and, if it is a typographical error, whether it represents a Freudian slip].  At Seattle WiFi Mug (Caffeinated and Unstrung: A Guide to Seattle's Free Wireless Coffee Shops), the page for the Queene Anne café provides an alternate perspective from a [presumed] WiFi laptop user: "until 8:30 it is wonderfull... From then onwards, there is just droves of very loud talking moms, with even louder children".

All of this is very much in keeping with observations Kristi Heim shared with me just yesterday morning about the sense of community at the original Caffe Fiore, the relative lack of community feeling at the Queen Anne cafe, and the role that WiFi likely plays in that difference.  I had never heard of Caffe Fiore before that, and I find it rather synchronistic that I just happened to come upon the cafe yesterday afternoon, after deciding to take the "northern" route home after a late afternoon meeting at Shilshole Bay Beach Club.  I'm not sure whether there are any coincidences, but when I encounter unexpected confluences and convergences, I like to investigate further, and am usually rewarded ... often in multiple ways.

Posted at 05:30 AM in Food and Drink, Places and Spaces, Web/Tech | Permalink | 0 comments