The Practicalities, Perils and Promise of RFID

Dorkbot Seattle offered a multidimensional opportunity to learn about and experience different facets of radio frequency identification (RFID) technology last night, under the provocative title "RFID - Identity That Gets Under your Skin".  There were three presentations and two types of opportunities for participation by attendees ... each requiring a significantly different level of commitment.

I led things off with a presentation entitled "The Practicalities, Perils and Promise of RFID" [embedded below], providing a high-level overview of how RFID works, a whirlwind tour of a number of its applications, and finishing off with a focus on one particular application near and dear to my heart: proactive displays.  I didn't focus too much on the "perils" part, because Doug Klunder, Privacy Project Director of the ACLU of Washington, was next up, and he did a great job in presenting some concerns that he and his organization are raising before the public and the legislature, highlighting how this new technology can threaten privacy and present new risks to our liberties.

Amal Graafstra, CEO of txtGroups, Inc., and author of RFID Toys, went third, and was the headliner for the evening (Kristi Heim, of the Seattle Times, wrote an excellent article about Amal -- "Man grips future with microchip implants in hands" -- that was printed yesterday morning).  Before his presentation, Amal, who has RFID chips implanted in each hand, narrated a live RFID implantation procedure performed by Dr. Virginia Stevens, M.D., a cosmetic surgeon with Seattle Health and Beauty, on Phillip Beynon, a college student and robotics -- and RFID -- enthusiast from Vancouver, B.C.  There were local three television affiliates -- KPCQ (Fox), KING (NBC) and KOMO (ABC) -- and Jenny Asarnow of local public radio station KUOW, on hand to cover this event.  The reporters and camerapersons were also there earlier, and although the cameras and audio recorders were rolling during the earlier presentations, and I saw some other interviews taking place before the main event -- and even participated in a brief, impromptu interview with Darren Dedo of Q13 Fox News -- I suspect all the media coverage will have focused on the live implant procedure ... which, I have to say, was pretty interesting to watch.  [ Here are some links to a video of the implant procedure on the Make blog (thanks, Scott!), audio and transcript of the KUOW report, and Phillip's notes on the event.]

Unfortunately, though, the media all left before Amal's presentation, and he had alot of interesting information to share about how and why he selected the RFID chips he has implanted in his hands (an EM4102 in his left hand and a Philips HITAG 2048 S in his right hand), why he would never use VeriChip tags (due to the ease with which they can be hacked), and how he uses his RFID implants to unlock his computer, his house and his car.  He also raised a number of serious concerns about the security of RFID technology (not just Verichip ... although they were the primary target of criticism), while also downplaying some privacy concerns -- at least with respect to their RFID-specificity -- noting that RFID technology is not so different from other technologies used to identify people ... all of which can be used to track people if data is collected from different sites and/or stored over a period of time. 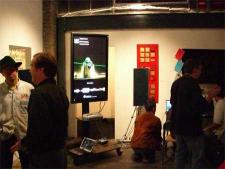 [Photo above is courtesy of Dan McComb]

Philip Beynon was not the only one to have an opportunity to gain a first-hand [pun partially intended] experience of RFID.  We also deployed a proactive display at the event, and had over thirty people create profiles and wear RFID tags -- inserted into their name badges rather than their hands.  Dorkbot is a loose-knit organization whose membership includes some of the most creative and curious people I've ever encountered; their tag line is "people doing strange things with electricity" and their monthly meetings include electronic artists of all stripes (sound/image/ movement/whatever), designers, engineers, students and other interested parties ... and the events are "free to all ages and species".  The images that people chose to share in their Interrelativity profiles were some of the most unusual and provocative of any I've seen in any previous deployment.  It was an honor and a pleasure to have an opportunity to share some knowledge and technology with these folks ... and to enjoy the content they shared, both on the proactive display and in the great questions and comments they made (during my presentation and afterward).

Posted at 10:39 AM in Conferences and Workshops, Events, Interrelativity, RFID, Web/Tech | Permalink | 0 comments