Co-promotional Considerations: Customerization and The Brand "Us"

Peter van Stolk, founder, president and CEO of Jones Soda, gave an energetic, inspiring and irreverent presentation at this month's NWEN Venture Breakfast on being relevant and real to, for and with your customers. The official title was "Creating Meaningful Relationships with Customers", but the unofficial title might be better expressed as "Marketing in a time when no one cares". [Note: The MP3 and slides from Peter's NWEN talk are not yet available, but much of the content -- and spirit -- of his talk can be found in the Fast Company article Jonesing for Soda.]

Jones Soda doesn't play by the usual rules of market competition: instead of choosing battlefields where their competitors might be defeated, they look for where their competitors ain't, and channel their energies into those fields of play ... an interesting variation of guerilla marketing, but more aligned with the art of play than the art of war. They particularly seek out people who are passionate about what they do -- musicians, extreme sports athletes, spelling bee competitors -- and sponsor their events and/or set up Jones Soda display cases in businesses that support those kinds of people (e.g., surf shops).

Peter shared a number of ways that Jones Soda creates and maintains emotional connections with its customers.  The one that I found most innovative and relevant was the Jones Soda Photo Gallery, which contains 786,000 of the over 4.5 million photos that Jones Soda customers have submitted as candidates for inclusion on a future Jones Soda bottle label (see an example above, from the January 2006 run). As Peter said, "you don't tell people you're cool, you let others tell people you're cool" ... and what better way to motivate customers to tell people how cool Jones Soda is than to put their photos on the labels?

I don't drink soda, and so while Jones Soda has been customerizing its labels since 2001, this was news to me. I also don't eat snack bars, so when I got home from the breakfast, and told my wife about how cool Jones Soda was, I was surprised when she showed me a Luna Bar that offered a slightly different variation of customerization -- using words instead of photos -- to enable customers to share "a dedication to a special woman in your life". 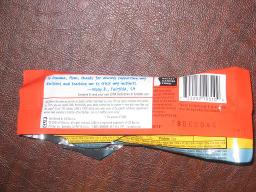 Yana Kushner, director of Luna equity and advanced product development at Clif Bar (who makes Luna Bars), also invoked the concepts of passion, excitement and connection in a Fast Company article about Brands We Love [note to self: subscribe to Fast Company again]:

A couple of years ago, we started something on the back of the bar called "Luna Dedication," where the women of Luna wrote personal dedications to women who have touched their lives in some way. By giving them a piece of ourselves, they feel part of the Luna family. It's a two-way street. It keeps them excited and passionate, and it also keeps us internally passionate.

I had earlier speculated on the evolving nature of promotional considerations as new social marketing channels arise, noting possible conflicts of interest that may diminish the potential impact of some of these channels (e.g., how much can we trust reviews by people who may derive direct financial benefit from the products or services they are reviewing). What I particularly like about the Jones and Luna customerization techniques is that they are really co-promotional: customers whose visual or verbal content is co-opted for use on labels can promote themselves (and/or their loved ones) along with the product(s) they are telling people about. Neither Jones nor Luna offers any financial incentive to people whose content is chosen for co-promotion on their labels; the wealth they are sharing is attentional rather than financial.

A few days after the NWEN breakfast, Biznik co-founder Dan McComb implemented a new feature on the Biznik web site that might be viewed as offering attention in return for attendance: showing photos of bizniks who were at an event (e.g., the Biznik Happy Hour). Although he could have simply listed the names of people who were there, showing the photos adds an extra dimension of recognition and acknowledgment, and I suspect this will provide more incentive for bizniks to both attend an event and to go back and review the events. It would be interesting to study the motivational differences between listing people's names and listing their names + photos in different contexts. 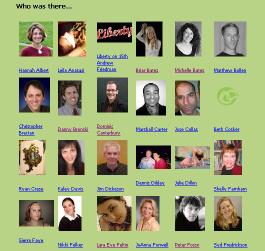 And, speaking of promotion, motivation and photos, I would be remiss not to comment on how Interrelativity offers a mechanism for co-promotion through our proactive display application -- most recently deployed at the Biznik Happy Hour -- which provides new opportunities for people to connect with one another by showing content from people's profiles on a large computer display when they are detected nearby. We interleave the display of sponsor profiles with attendee profiles -- providing each sponsor and attendee 10 seconds of fame in a revolving window of attention -- so that people can learn more about sponsors while they are learning about each other (examples of sponsor profiles for the BalMar and Biznik, with an attendee profile for me in between, are shown below). 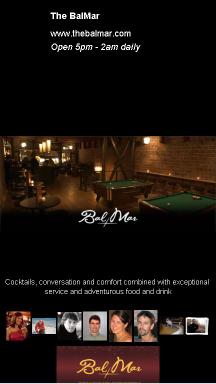 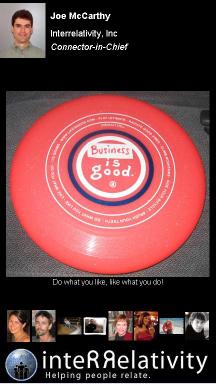 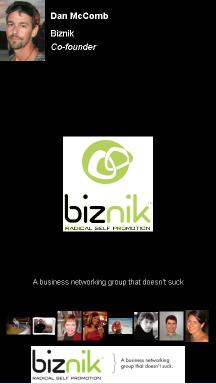 Each time we have deployed our system, surveys have shown that people have learned new things about both people they hadn't met as well as people they already know. And, although we haven't explicitly asked this question, observations and informal interviews suggest that people enjoy seeing their own profiles shown on the big plasma display as much as they enjoy seeing other profiles. Our latest surveys have also been investigating whether people are also learning things about the sponsors ... who, at least in the current business model, are the ones who will be paying for the co-promotional considerations.