Awarea: Taking RFID to the Streets

Around 1997, I shifted my research focus from artificial intelligence to ubiquitous computing, and started exploring -- and working with others to create examples of -- what I called active environments: physical spaces that can sense and respond in contextually appropriate ways to their inhabitants.  One of the things I learned from my AI research experience was the importance of constraining a problem to make it [more] tractable.  Ubiquitous Computing has a rather broad scope -- encompassing computer technology permeating [potentially] every facet of our physical environments -- so in order to make progress in this area, I decided to focus on potential future scenarios involving the novel integration of technology into single rooms (such as MusicFX), or subregions within a building (e.g., ActiveMap).  I sometimes affectionately referred to this focus on active environments as "UbiComp in a Box". 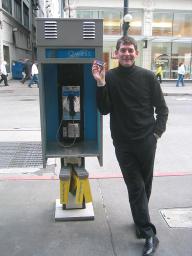 Yesterday, I had the pleasure of meeting with Harry H. Hart, III, the CEO of Awarea Corporation, who started exploring the idea of activating spaces around the same time that I did, but from an entrepreneurial perspective ... and with a willingness to break out of the box[es] and deploy RFID technology on the streets of Seattle (and soon, Vancouver, BC).  Awarea uses active radio frequency identification (RFID) tags -- called MyOmni's, with a convenient keychain attachment -- and a network of RFID readers and activators -- creating OmniZones -- to sense when users are nearby and respond with a targeted marketing message that takes the form of a text message sent to the user's mobile phone and/or some kind of audio and/or video message broadcast on a speaker or large display.  The left photo here shows Harry with his MyOmni device (a closeup of which is shown in the right photo) standing next to a public telephone booth outside of the Nordstrom flagship store near Westlake Center that has an OmniZone antenna mounted atop a loudspeaker system.

There are currently 16 OmniZones throughout Seattle (browsable via this interactive map), and Awarea has signed up 30 companies on whose behalf it is using the network to send targeted marketing messages to approximately 1000 users.  To sign up for the service, users are required to enter contact information (including a mobile phone email address) on a web site, and then during a followup phone call, are asked about demographic / psychographic data such as

There are four classes of OmniZone:

The MyOmni device -- which, along with most of the other RFID equipment, is manufactured by Axcess, Inc. -- has a single button that can be used to request a targeted message (it can also be programmed by Awarea for other functions).  Harry spends so much time in OmniZones (in fact, he rang in the New Year at the one shown above) that he has set his profile to decline all messages unless / until he specifically requests a message via that button.  He demonstrated a few examples of targeted audio messages at gold OmniZones around Westlake Center (one such message, promoting NetFlix, can be heard in this WAV file; I also heard one promoting The Body Shop ... as we were standing outside the store at 600 Pine Street).

Aside from the obvious tecnnological parallels between Awarea's [platinum] OmniZones and Interrelativity's proactive displays, both of which use RFID technology to sense and respond (in different ways) to people nearby, the systems also share some similar social impacts.  Given the reactions that I observed from people as they heard the "voice from the heavens " (or the phone booths) -- BTW, Harry is the voice talent in all the audio messages -- I imagine that MyOmni users may well spark interesting conversations in OmniZones ("What was that?", "Where did that come from?", "What did he say?", "Where is the Body Shop?", "How much of a discount?").  And Awarea plans to add new features with mobile social software (MoSoSo) capabilities, e.g., the ability for MyOmni users to specify a "buddy list" of other users, and receive notifications whenever their friends are in the same, or nearby, OmniZone.

One of Harry's initial motivations for this work was to aid blind people as they navigate urban areas; unfortunately, while he found receptivity to this idea, he was unable to find a revenue stream to support it (a plight I can identify with, and have heard and read about as being a common challenge for other entrepreneurs), which is why the current focus is on targeted marketing.

I first met Harry at the recent Dorkbot meeting on RFID.  Interestingly, in updating my RFID Resources material for my presentation at the event, I discovered a fabulous, futuristic short film, The Catalogue, by Chris Oakley, that depicts people in a multi-level shopping mall (that looks remarkably like Westlake Center), with overlays depicting the information that might be automatically extracted about those people, the objects they encounter, the places they visit, and the activities in which they engage, if / when RFID technology becomes more pervasive (and accurate) ... highlighting the challenges for companies like Awarea -- and Interrelativity -- to define compelling value propositions in which the benefits to users outweigh the [potential] privacy costs.

[Update, 2008-04-04: My colleague, Nick Chiarulli, at the new MyStrands Labs, NYC, sent me a link to some related work - a short-lived experiment on advertising via directed ultrasonic beams in NYC.]