Locks and Keys to Object-centered Sociality in the Physical World

After packing up our proactive display equipment from the Zino Society event, we headed over to BalMar Lounge to observe another kind of technology used to enhance interactions among people attending an event: a Lock and Key Party organized by Space City Mixer.

Here are the rules:

We arrived late in the game, but Andrea convinced me to try a key on for size, and experience the magic for myself.  And what an experience!  I could see the genius in this "speed-dating on steroids" arrangement: every woman I approached held up her lock, regardless of whether she was unengaged, engaged in a conversation, or engaged in an exchange that might well have been leading to more than conversation. This "easy in / easy out" approach, where each participant can make momentary eye contact, say hello (we were wearing name tags) and exchange a few words -- if only about how many matches each has found -- provides a perfect example of the thin slicing that Malcolm Gladwell talks about in his book, Blink.  Any woman who wanted an excuse to disengage from a current conversation partner could do so the next time a new key came around, and any man who wanted to disengage from a partner could do so on the pretext of wanting to find more matches (and claim prizes), reducing the risk that anyone will take anything personally.

Scott observed from the sidelines that there appeared to be three types of participants: those who were relatively passive (responding only to others' advances), those who appeared to be selectively active (taking some time with each of several prospective matches) and those who appeared to be almost hyperactive (trying as many matches in as little time as possible).  Obviously, there are different types of "prizes" one might take away from such an event, and so I imagine the strategies reflect different prize-orientations.  Although I was only looking for the in-game experience (my wife has been encouraging me to investigate the singles scene as a target market for Interrelativity), I could see how this activity would provide huge opportunities for making different types of connections to a broad range of personality types.

This experience also helped me appreciate the potential value of a slightly higher-technology approach to the same goal that I read about recently: the MatchlinC device used at OneKeyAway events.

OneKeyAway events offer two extensions from the lower tech lock and key party described above.  One is the substitution of the MatchLinC device, which is billed as a personal electronic relationship advisor, for the lower-tech locks and keys.  Each MatchLinC device is programmable, and so can  actually be personalized in some way for each participant; short-range infrared signals are used to check for matches, so no physical contact is required (though, after having participated in an "old-fashioned" lock and key event, I'm not sure whether this lack of any physical contact is a bug or a feature).  An algorithm is used to compare personal profiles stored on each of the paired devices, and a set of LEDs is used to indicate level of compatibility. I'd first read that MatchLinC uses a traffic light metaphor: green for compatibility, red for incompatibility, yellow for something in between (reminiscent of the Lovegety devices and other [fabled] derivatives), but the web site reports that 11 distinct levels of compatibility can be indicated on the device.

The other difference is the use of a 64-item questionnaire that participants fill out before an event, whose results are used to program each person's MatchLinC device.  This approach sounds very similar to the Meme Tags that Rick Borovoy and his colleagues developed at MIT Media Lab almost a decade ago, and which formed the basis for nTag, Rick's venture to commercialize this social technology, athough I think the original Meme Tag questionnaire included only seven questions and the newer nTag devices enable questionnaires to be filled out on the device itself. 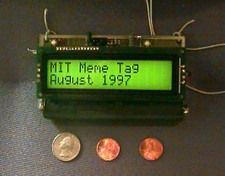 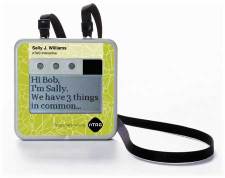 The OneKeyAway questionnaire has 64 items, including the following topics:

This seems like quite an extensive profiling mechanism, and while the MatchLinC devices purportedly encode the individual profile responses to prevent hacking into another device to learn specific responses (vs. an overall compatibility indication), there have been reported instances of nTag device hacks, and so I wonder how secure these devices are.  I also find it astonishing that people would be willing to fill out such an elaborate profile, but perhaps that is not such a stretch for people in the singles market, give some of profiling required for online dating services.

All of these approaches represent new dimensions of the object-centered sociality that Jyri Engestrom wrote about with respect to the socializing that takes place in purely online social networks.  It's not sufficient simply to put people together in the same space -- online or offline -- and expect them to connect with one another; proximity is important, but just as important is giving people something to talk about.  Indeed, providing such "tickets to talk" was one of the goals behind our original Ticket2Talk proactive display application, but perhaps the ambience and subtlety we were designing for in the context of an academic conference isn't as important in a context where the number one goal of people is to make connections. 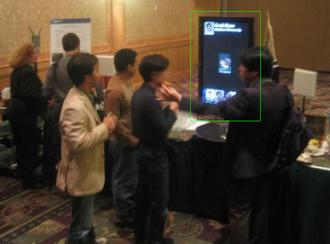 In the context of a singles bar, and especially during a singles event, I'm sure that lighting up one or more LEDs on a device can get some interesting conversations going about the devices themselves (I imagine there is a significant novelty effect), and perhaps even some of the deeper questions -- about relationships, sexuality and religion -- that were used to program the devices.

When I first read about OneKeyAway, I was very skeptical about this technology and its impact, largely due to my own bias toward designing technology that fits as closely as possible into the existing practices of people in places of use.  The interactions at events depicted in photos seemed so, well, contrived. However, having participated in a "traditional" lock and key party, I can see how inserting technology -- whether physical locks and keys or higher tech devices that provide expanded functionality -- that creates or facilitates new practices can be very effective at helping people connect.

Posted at 08:48 AM in Events, Making Connections, Web/Tech | Permalink | 0 comments