I had a remarkable Starbucks Experience yesterday, which prompted me to go back and review my notes from Howard Schultz’s inspiring book “Pour Your Heart Into It: How Starbucks Built a Company One Cup at a Time” (co-authored with Dori Jones Yang).  It reminded me of my intention to start posting more summaries of the books I enjoy ... an intention I mentioned in posting a summary of Tim Sanders' book, “Love is the Killer App”, last month.

I picked up Howard's book shortly after blogging about some statements he made to Congress and Know Magazine about human needs, community and health care last fall.  Of the many aspects of the book that resonate with me, three that percolate to the top are passion, perseverance and partnership.  Howard emphasized the importance of being passionate about what you are doing, and hiring other people who share your passion (and commitment and goals), so that this passion can be effectively communicated to your customers, many of whom are looking to fill voids – of passion, romance, community, and other soulful fillers – in their lives.

Perseverance is another recurring theme throughout the book. One of my favorite quotations in the book highlights the value of this quality or attitude:

Again and again, I've had to use every ounce of perseverance and persuasion I can summon to make things happen.  Life is a series of near misses. But a lot of what we subscribe to is not luck at all.  It's seizing the day and accepting responsibility for your future.  It's seeing what other people don't see and pursuing that vision no matter who tells you not to. ... when you really believe -- in yourself, in your dream -- you just have to do everything you possibly can to take control and make your vision a reality.

Partnership is a theme that I’ve been thinking about – and acting on – a lot lately. I recently wrote about “Everyone’s a Customer” … and a variation on this might be “Everyone’s a [Prospective] Partner”.  Howard’s experience illustrates many different aspects of partnership, the sum total of which makes up a significant part of the Starbucks history and culture.  According to the book, all of the people who might be called “employees” in other corporations are called “partners” at Starbucks, and it doesn’t appear to be simply a label – through the company’s BeanStock program, many of the partners are able to become shareholders as well.

Recognizing both his strengths and his areas for development, Howard was able to recruit some outstanding partners for senior executive positions.  One of the first was Dave Olsen, the “ideal person [who] came to me, just when I needed him most” (when the employer is ready, the employee appears?), who ran Café Allegro in the University District of Seattle, and had an incredible knowledge of coffee.  Dave could have been a competitor when they met, as Howard was planning to open another café in Seattle, Il Giornale, but chose to work with Howard for “a paltry salary of $12,000 a year” to help get the business started.

Dave wasn’t in it for the money. He joined our team because he believed.

Howard goes on to elaborate on the more general principle this illustrates:

If you're building an organization, you quickly realize that you can't do it alone.  You'll build a much stronger company if you can find a colleague you trust absolutely, someone who brings different strengths to the mix but who still shares your values.

Another key partner was Howard Behar, who helped Howard [Schultz] better recognize that it was the people of Starbucks that mattered more than anything else (including the great coffee about which they were all so passionate), and proposed a number of programs to help celebrate, recognize and reward the Starbucks partners, e.g., hand-signed birthday cards and starting-date anniversary cards, and recognition programs encouraging partners to nominate their colleagues as trendsetters or store managers of the quarter.

Orrin Smith was also an important partner in the ranks of the senior executives:

"It's hard to execute entrepreneurially." Orrin Smith has to keep reminding me of that. ...
Many business visionaries have failed as leaders because they could not execute. Processes and systems, discipline and efficiency are needed to create a foundation before creative ideas can be implemented and entrepreneurial vision can be realized.
...
Building processes is not a skill I have.  It's beyond my interests and abilities.  What I did to compensate, what every visionary entrepreneur needs to do, is find an executive who can build the infrastructure the company needs without sacrificing the need for innovation.  But it has to be someone who understands the value of unconventional wisdom.  At Starbucks, that executive is Orrin Smith.

Howard also talks about his relationships with other kinds of partners, including his investors, board of directors and mentors:

My initial fears about venture capitalists proved unfounded; what I found, in fact, was the opposite.  Instead of interference, I gained another set of trusted advisers with long-term horizons. ...

My relationship with the board took an unusual turn when I came to view them more as trusted advisers than as supervisors.  Unlike many CEOs, I was direct with them, confiding in them my problems in running the business.  They always challenged me to defend my ideas, and we had open and frank discussions at board meetings. They continually pushed me to sharpen my focus and set clear priorities, fearing that my entrepreneurial zeal would send the company in too many directions. ...

Once you've figured out what you want to do, find someone who has done it before ... with the right mentor, don't be afraid to expose your vulnerabilities. Admit you don't know what you don't know. When you acknowledge your weaknesses and ask for advice, you'll be surprised at how much others will help

There are several other dimensions of partnership that Starbucks has embraced, including relationships with Pepsi-Cola (Frappucino), Redhook Brewery (Double Black Stout), Dreyer’s Grand Ice Cream and United Airlines.  Hardly surprisingly, given the strength of its brand, Starbucks rejects far more partnership overtures than it accepts.

There are many, many other aspects of the book that I find personally inspiring, from Howard’s emphatic embrace of integrity, openness and vulnerability, to Starbucks’ willingness to experiment (e.g., their foray into the music business), to their dedication to building Great Good Places offering “an inviting, stimulating, sometimes even soulful respite from the pressures of work and home”. 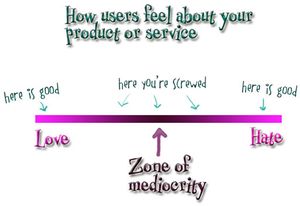 I know that Starbucks has its detractors, and I won't deny that some of the detractions may have some merit, but as Kathy Sierra expressed so compellingly in her post "Be Brave or Go Home":

... the worst thing is being in the Zone of Mediocrity. That's what we should all be afraid of.

The last thing I’ll mention about the book is Howard’s invocation of a theme that recurs repeatedly in this blog: the idea of a mensch.  This emerges in Howard’s recounting of Starbucks’ experience in preparing for their initial public offering:

"Do you know what the problem with your business [investment banking] is?" I asked.  Dan [Levitan] braced himself for a major indictment of the investment banking industry.  "No, what?" he said warily.
"There are not enough mensches."
I assumed Dan would know what the word mensch, a Yiddish way of describing someone who is basically decent, honest, and full of integrity.
Dan jerked his head up and looked me directly in the eye.  I could see that he took my point, instantly.  My guess had been right: Dan was a mensch.
…
He [Dan Levitan] found it hard be a hard sell ... coffee didn't strike Dan's colleagues as an obvious moneymaker ... Ironically, Dan got to experience first-hand what I had been going through in Seattle, learning how tough it was to communicate intangibles like passion and values to hard-bitten skeptics.

I can relate to the difficulty of communicating intangibles, and the challenges of trying to articulate a value proposition that is imbued with passion, integrity and community … something that makes meaning without an immediately obvious path to making money. <sigh>