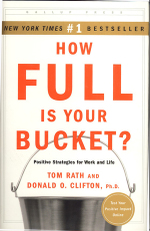 How Full is Your Bucket? Positive Strategies for Work and Life, a book by Tom Rath and the late Donald O. Clifton, provides a simple metaphor of buckets and dippers to represent the way we store and forward positive and negative emotions, and highlights the tremendous cumulative impact of all our individual choices to fill or dip from others' buckets in our families, workplaces and society. The book has an online companion site with a number of tools to test factors and apply strategies they propose in the book, but I see a number of other online mechanisms that can be seen as filling or dipping into buckets. And, as is so often the case, I see a number of connections to other things I've read (and written about), including books by Guy Kawasaki, Don Miguel Ruiz and Howard Schultz, a number of blog posts by Kathy Sierra, and my own evolving notion of a personal attention economy.

The book starts off with The Theory of the Dipper and the Bucket:

Each of us has an invisible bucket. It is constantly emptied or filled, depending on what others say or do to us. When our bucket is full, we feel great. When it's empty, we feel awful.

Like the cup that runneth over, a full bucket gives us a positive outlook and renewed energy. Every drop in that bucket makes us stronger and more optimistic.

But an empty bucket poisons our outlook, saps our energy, and undermines our will. That's why every time someone dips from our bucket, it hurts us.

So we face a choice every moment of the day: We can fill one another's buckets, or we can dip from them. It's an important choice -- one that profoundly influences our relationships, productivity, health and happiness.

Instances of bucket filling or dipping not only have an important influence on the emotions of the individuals directly involved, but also tend have a network effect in creating "chains of interpersonal events" that have far-reaching impact beyond that single interaction. The book talks about the propagation of positive emotions, but I think all emotions, especially strong ones, have a tendency to propagate. As an example, I notice that in my driving experience, when another driver opens up a space for me to merge into traffic, I am much more likely to open up a space for other drivers ... and while I hate to admit it, when another driver cuts me off I feel a strong urge to return that "favor" -- and to pass it on to others -- as well.

There are high costs associated with insufficient bucket filling and/or inordinately high levels of bucket dipping. Lack of recognition and appreciation is the number one reason people leave their jobs (and I imagine it takes a toll in marriages and other personal relationships as well). Rath and Clifton estimate that the annual cost of the 22 million "extremely negative or actively disengaged employees" -- many of whom presumably lack recognition and appreciation but do not leave their jobs -- may be $1 trillion (10% of the U.S. Gross Domestic Product), when factors such as lost productivity, workplace injury, illness, turnover, absences and fraud are taken into account ... and these don't consider the full network effect of actively disengaged bucket dipping throughout an organization. They do not provide estimates of the costs of actively disengaged spouses or parents ... I suspect that while these may be more pervasive, they would be more difficult to measure.

The book's web site provides an online tool for sending electronic drops to fill others' buckets. I like the idea, even though it reminds of an electronic "kudos" program that was used in a former place of employment that was not very effective; I suspect this failure was due in large part to more systemic problems in the way the company manages its human relationships ... I don't know anyone who has ever worked there who would accuse the company of overfilling their buckets.

There are many other ways that people can fill or dip electronically, e.g., Amazon reviews, eBay ratings and LinkedIn testimonials. I have been feeling ambivalent about this last category -- for some LinkedIn members, it sometimes appears like part of a game (in which people try to collect as many links and testimonials as possible), but I'm going to think more -- and possibly act -- on this, based on some new insights from this book. Another category that I consider more promising is blog comments and trackbacks, and although I know some people are rather cynical about interactions in the blogosphere, I have found this to be a more natural mechanism for filling buckets, and as with driving, the more I feel the positive emotions that come when others take the time to comment on my blog posts, the more willing I am to take the time to post comments on others' blogs. I know that some blog comments can represent bucket dipping, but I am fortunate in rarely having experienced this (as dipper or dippee).

The main resistance I have to fully embracing the concepts in this book was immediately obvious to my 10-year-old son when I read him the theory of bucket filling and dipping: "I thought you said it shouldn't matter what other people say about you?" As I've noted earlier, I have an ongoing ambivalence over independence vs. interdependence, or how much I choose to be affected by others' actions (or inaction) -- or, indeed, as a social animal, how much power I even have to choose. The second agreement in Don Miguel Ruiz' book The Four Agreements: A Practical Guide to Personal Freedom states Don't take anything personally, i.e., anything anyone else says to or about me is really more -- or perhaps entirely (?) -- about them rather than me ... and, conversely, anything I say to or about another person is really about (and often for) me. I think Don Miguel himself has some ambivalence about this, since one of his arguments for the first agreement, Be impeccable with your word, is that our words can have significant positive or negative impact on others ... and, thus, one might reason, others' words can impact us ... um, even if we don't take anything personally (?).

There are a number of touchpoints between the Rath and Clifton book and themes I read (and wrote about) in Howard Schultz' book "Pour Your Heart Into It", given Howard's emphasis on perseverance -- which might be framed as maintaining a full bucket despite repeated bucket dipping -- partnership -- partnering with potential best friends and regularly filling their buckets ... and having his bucket(s) filled by them -- and everything matters -- the Rath and Clifton book has a chapter on "Every Moment Matters" highlighting the larger effects of what may seem like insignificant interactions.

Yesterday, in addition to posting my summary of Howard's book, I also posted a comment on yet another inspiring blog post by Kathy Sierra on Mediocrity by "areas of improvement", in which she shares her insights and experiences with performance reviews, and the detrimental impact these can have through focusing on "areas of improvement" rather than celebrating and encouraging employees to develop their areas of strength. I recommended the Rath and Clifton book, even though I hadn't read it, simply on the basis of its title. This morning, I woke up around 3:30, and felt a strong urge to get up and actually read the book, and it turned out to be far more relevant to her post than I had imagined. I've already touched on some of these areas of relevance, but I'll mention another dimension here: the applicability and impact of bucket filling and dipping within one's family:

Instead of celebrating what makes each child unique, most parents push their children to "fit in" so that they don't "stick out". This unwittingly stops out individuality and encourages conformity.

This conformity (which reflects the mitote that Don Miguel Ruiz writes about) then extends into the workplace:

Essentially, you were hired for a job, then you were expected to change who you were to fit the role. If you struggled, then you may have to endure a "competency" program designed to "fix the problem". The weakness-based approach follows us throughout our lives from school to the workplace.

This reminds me of the well-documented problems that occur when one enters a long-term personal relationship, such as marriage, with the expectation that one can change one's partner. I now see how that this weakness-based approach can be just as damaging in a parent-child relationship, or a teacher-student relationship. Rath and Clifton report on a study done in 1925 that showed how students whose work in a math class over a 5-day period was consistently [and deservedly] praised by a teacher showed far greater improvement (71%) than those whose work was [deservedly] criticized (19%) or ignored (5%).

I recently wrote about how I am becoming increasingly -- and painfully -- aware that I have not been paying much attention to my family (especially my children). I now recognize that, despite my best intentions, I have been dipping more often -- and filling less often -- than I want to. I also recognize that attention itself is a currency that can be used as a bucket-filler, and that I run the risk of passing on the attention deficit I inherited to my children, with all the rights and privileges pertaining thereto. The simple terminology and concepts introduced by How Full is Your Bucket will help me be more conscious of how I choose to focus my attention -- and other actions -- in the future.

[Update: I took the Clifton StrengthsFinder assessment -- one of the online tools mentioned above -- and discovered my top five strengths (among a set of 34 themes) are:

I can't say there are any surprises here, so maybe I should say this was more of a confirmation than a discovery ... though I'll also note that I'm not the only one who has noticed a potential analogy to astrology.]

Tags: how full is your bucket, positive psychology