Home Archives Profile Subscribe
Honor and Consciousness on MLK Day
Blog What You Love, The Money Will Follow

Phil Condit, former chairman of Boeing, and four groups of entrepreneurs gave presentations emphasizing -- and exhibiting -- passion and knowledge at an Executive Roundtable meeting of the Zino Society last night at The Rainier Club ... then we all tasted some wine.  It's hard to imagine a more winning combination for a successful meeting!

I first heard of the Zino Society when Megan Schindler left her position as Assistant Director at the Northwest Entrepreneur Network to become the Zino Society's Director of Operations this summer.  When I took a quick look at the web site at that point, I remember thinking that this was a social club devoted to wine enthusiasts ... and while I love socializing and wine (especially when combined), my venture, Interrelativity, was not -- and, regrettably, is still not -- generating enough revenue to support such an indulgence.  When Kenny Byrne told me that he was giving an investment pitch at a Zino Society meeting this week, I went back to the site, and discovered that the organization is devoted not only to socializing and wine but also to matching up investors with entrepreneurs.  While I don't think I'm quite ready yet to seek investment for my own venture, I thought this meeting would be a great opportunity to find out more about this potential future path to investment.

Phil started things off by advising "Whatever you do, you have to follow your passion."  This is advice he gives not only to students trying to figure out how best to channel their energies to build their careers, but also to investors seeking opportunities for channeling their money (which, I suppose, may be thought of as simply another form of energy).  He said he is wary of entrepreneurs who exhibit a "spreadsheet mentality" and instead pays attention to the passion an entrepreneur has for his or her idea(s).  When asked about whether anything else matters, Phil added that [business] knowledge was pretty important, too, and that the next best thing to a passionate and knowledgeable entrepreneur was a deeply passionate entrepreneur who knows his/her areas of knowledge deficiency and builds a team to fill in all the holes.  [Note to self: build that team!]

After Phil's opening presentation, four entrepreneurs -- and members of their teams -- gave presentations to make the case for investing in their respective ventures (in case it's not obvious, there were a number of prospective investors among the Zino Society members and guests in the audience).  Because of my uncertainty about the confidential nature of some of the material, I'll restrict my comments to information available on web pages and general observations, and I want to explicitly note that I have no business relationship with any of the people or companies who were presenting (but do have a personal friendship with one of the presenters, as noted above).

Chris Rathe, co-founder, president and CEO of PriTest ("Illuminating Biodetection"), made a strong case for the need for and benefits of his company's products for food safety testing and life science markets.  In addition to the content of his presentation, I was impressed with the quotations he included from luminaries who corroborated the need, the benefits, or both.

Brian Carter, winemaker and COO of Brian Carter Cellars (and winemaker at Apex Cellars), and Mike Stevens, general manager and CFO of BCC, gave a presentation on their passion for -- and knowledge of -- the art of winemaking.  Their presentation concluded by augmenting the more traditional financial return on investment figures with some winery-specific perquisites, such as special events, discounts and wine labels, that I suspect were of particular appeal to this audience of wine aficionado investors.

Kenny Byrne, CEO of iSoldIt of Washington, presented the business value of his franchise, which helps make it easier to sell goods on eBay (the importance of which I blogged about recently).  One of the insights I got during Kenny's presentation was that alot of his business is related to major life stressors -- people who are selling things due to big changes such as the death of a loved one (estate sale), divorce, job change and moving.  He also noted that the success of eBay (and his company, and his customers) is due to openness and transparency -- everyone on eBay can see what and how everyone else is doing (reminding me of some of the principles of Open Book Management articulated in Jan Jewell's NWEN presentation a while ago).

Kay Syrrist, co-founder and Director of Operations,  and Josh Hanson, co-founder and Director of the Wine Group, showed how their venture, Small Vineyards Imports, is forming a channel for funneling the passion -- and quality -- of small wine producers through a consortium that creates economies of scale in a way that offers a win-win value proposition for all stakeholders (producers, retailers, consumers ... not so sure about the distributors, but that's another matter).  One of their producers from Italy, Antonio Sanguineti (shown below), arrived midway through the presentation and was available afterward to pour wine and share his perspective on Small Vineyards and other wine-related topics. 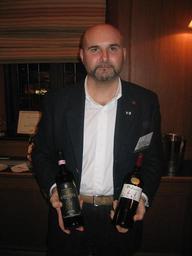 Ah, and this brings me to the wine tasting.  In addition to wines made by Brian Carter Cellars and others by imported by Small Vineyards (my favorite of which was the Duet made by Edi Simiic in Slovenia, in Antonio's left hand -- and so shown on the right side of the photo -- above), two other sets of wines were being offered for tasting.  Bob and Cathy Betz of Betz Family Winery brought their 2003 Clos de Betz, Père de Famille and a southern Rhone-inspired blend of Grenache, Syrah and Mourvedre (whose name I can't recall).  The 2002 Père de Famille was one of my favorite Washington wines of that vintage, but I liked the Rhone blend best of the three poured last night (unfortunately, it's not yet available).

Hope Moore, of Make-the-Dash-Count Foundation, poured their 2002 Merlot, made by winemaker Chuck Reininger of Reininger Winery.  The wine was very good, but I was even more inspired by the story behind it:

The Dash between the dates on our tombstone is a simple mark carved in stone that represents our lives and what we did with them. Have you ever stopped to consider this thought? Are you making your Dash count?

In December 2002 the idea was born to create a non-profit foundation called Make The Dash Count and establish a winery called Heaven's Cave Cellars. The concept was simple. I wanted to utilize the talents of experienced wine makers from Washington state wineries to create a premium red wine that would showcase not only their commitment to wine making excellence, but also their dedication to philanthropy and giving back to their communities. I wanted to take the two things I'm most passionate about and blend them together to make a difference, a way to make my own Dash count.

A potent combination of passion, knowledge and wine, indeed!

Posted at 07:44 AM in Entrepreneuria, Events, Food and Drink, Organizations | Permalink | 0 comments