Wine Spectator recently published an article about how my former colleagues at Accenture Technology Labs have deployed wireless sensors to measure "microclimate data such as soil and air temperature and moisture content, rainfall and leaf wetness" over a 30-acre area in Sonoma's Pickberry Vineyard, which supplies grapes to Ravenswood. I'm reminded of another wireless vineyard project undertaken by my current colleagues at Intel Research a couple of years ago. I don't know if there is much evidence [yet] regarding whether these technological interventions are resulting in the production of better wine, but in case any of my current or former colleagues are reading this: I would welcome the opportunity to assist with the quality assurance testing :-).

I watched "The End of Suburbia: Oil Depletion and the Collapse of The American Dream" last night in the Lower Level of the Capitol Hill Arts Center, preceded by a presentation by Jake Perrine of the Art Institute of Seattle and followed by a discussion led by Eric Magnuson of Bainbridge Graduate Institute [there will be another screening, presentation & discussion there on August 24]. I've been increasingly questioning my suburban lifestyle since reading "The Great Good Place: Coffee Shops, Bookstores, Bars, Hair Salons, and Other Hangouts at the Heart of a Community" by Ray Oldenburg; this movie ratcheted up the inquiry. The documentary film, which has been compared to Michael Moore's Fahrenheit 9/11, focuses on the World Oil Peak, which is predicted to occur sometime during this decade (i.e., by 2010), after which point the supply of oil will decline, prices for oil -- and everything that depends on oil (which is nearly everything, at least in the USA) -- will rise and, according to the commentators in the film, significant economic, social and political upheavals will ensue. The film emphasizes the particularly harsh impact the post-peak changes will have on suburban lifestyles in this country, though clearly the entire population of the country (and world) will be adversely affected.

Posted at 08:40 AM in Current Affairs, Film, Politics | Permalink | 0 comments

I've joined the ranks of Native American flute players, with my purchase of a High Spirits "Golden Eagle" flute in F# (cedar, with turquoise inlay), after a rather synchronistic series of events. On my way home from a particularly moving Reiki session with Eileen Wurst, I decided to stop by East West Bookshop to look for the Kamal Whale Reiki Song CD that was playing in the background during the session. As I searched for the CD, I came across Emergence by R. Carlos Nakai, which reminded me of Joel Kagan (and Joel's passion for Native American flutes), whose mentorship during my time on the Computer Science faculty at the University of Hartford had emerged during the Reiki session a short time earlier. As I waited in line to pay for the CDs, I glanced over to the glass display case near the door -- that I had never noticed before -- and saw a display of flutes; I bought one, on impulse, and have been playing regularly ever since ... hoping to capture the playful spirit of Kokopelli.

Chris Arnold reported on "Tips to Avoid Internet Identity Theft, E-Mail Scams" during today's Morning Edition on NPR. One recent development is organized crime's growing involvement in such scams, for which unemployed computer programmers are being hired to write code for phishing attacks, "'spoofed' e-mails and fraudulent websites designed to fool recipients into divulging personal financial data such as credit card numbers, account usernames and passwords, social security numbers, etc." The US government has created programs to hire or otherwise find new jobs for nuclear scientists in the former Soviet Union and Iraq; maybe we need a similar program to keep unemployed programmers from wreaking havoc on society.

Shortly after moblogging the placard "Smile ... you are simply amazing" at Zoka, I read a note from Sean, who sent me a link to this inspiring post about creativity by 'hugh "cartoons drawn on the back of business cards" macleod'. I smiled yet again when I read an elaboration on the first step of "How to be Creative" -- namely, to "Ignore Everybody" -- which starts off with a cartoon of a sheep saying "Gosh, I'm amazing." I wonder if this sheep also got coffee at Zoka this morning :-) ... or could this be me? :-\

[In case the hyperlink to the cartoon breaks, the caption reads "It's OK to act like a sheep (just so long as you act like a COOL sheep)"]

A reason to smile at Zoka

This simple placard ... and the Kenyacaragua :-) 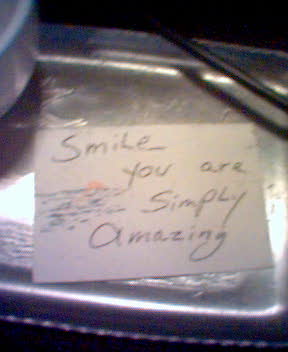 [In case the hyperlink to the photo breaks, the caption reads "Smile ... you are simply amazing"]

Posted at 07:54 AM in Blogging in Place, Food and Drink, Inspiration | Permalink | 0 comments