Mike mentions a New York Times article on "Seeing Double to the Perfect You" that talks about the decreasing differentiation between human and non-human beings. As part of "the relentless, and uniquely American, drive to self-improvement" people are augmenting their bodies, for enhancing either form (e.g., plastic surgery) or function (e.g., pacemakers); a reference to a photo layout in the Italian Vogue magazine suggests that this "fascination with artifice" may not be quite so uniquely American.

Given my obsession with large displays, the following reference to content shown on displays in the Prada flagship store is [also] of interest:

On large and small plasma screens all around the store, a succession of naked, computer-generated humanoids goose-stepped with eerie precision toward some far-off unseen goal. For this young customer, it was all a bit much. "This store gives me the creeps," she muttered, then turned on her heel and, with ponytail swinging, darted out the door.

A poignant example, though in a different domain, of what Desney Tan, et al., have demonstrated in their research into large displays: namely, Physical Size Affects Social Perception of Information.

I recently read "Blogging Off," an article by Whitney Pastorek that originally appeared in The Village Voice and was reprinted in the July / August issue of Utne Reader. Whitney presents an amusing analysis of "How Blogs Are Ruining My Life" that includes "No one shows up for events anymore" (they simply post something about it in their blog, presumably with the assumption that blogging is the next best thing to being there), and "No one invites me to anything anymore" (bloggers and non-bloggers don't mix [well] ... for long). What I particularly like, though, is "No one tells me anything anymore":

These days, I don't even hear about the stupid stuff that's going on -- "I got a haircut" or "My apartment burned down" -- because the bloggers assume that I have read about it on their blogs.

Or, in other words, Read The F***ing Blog (RTFB) ... I knew it would come to this :-). Among the other humorous observations in the article are a reference to Friendster as "a gateway drug" to blogging, and a definition of the Blogging Caste System (BCS), which ranks the "fabulosity" of different types of bloggers and non-bloggers.

I was out walking along the Tolt Pipeline Trail this afternoon with my dog, JoJo, listening to The Ultimate Anti-Career Guide audiobook by Rick Jarow on my new iPod (which I purchased primarily to listen to this 9 & 3/4 hour program, though I think I'll be downloading more Audible titles ... perhaps even some music). As I approached the car, Jarow was talking about Henry David Thoreau, and his decision to go into the woods and adopt the profession of "chief inspector of storms" rather than continue in the successful family business of pencilmaking. The last thing Jarow said before I paused the iPod was

I opened up the car to get out the frisbee I use as a makeshift water bowl to give JoJo some water, and I noticed (for the first time (!)) that it had the logo "Life Is Good" (tm) on the center, and had the following words of wisdom in a circle around the center: "Play Ultimate * Radiate Good Vibes * Climb Mountains * Ride Your Bicycle * Brush Your Teeth * Do What You Like * Like What You Do." An inspiring instance of synchronicity. 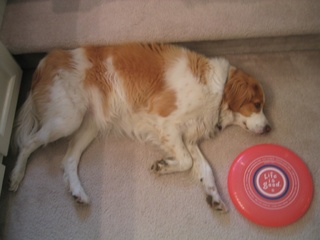 Marc Horovitz and Lisa have brought their Mobile Coffee Unit to Street Talk. They are so busy serving up free coffee & conversation, they aren't able to physically attend the event up here at the Intel Research Berkeley lab. There's no wireless access outside on the street, so posting this picture is the best solution I could come up with to help them "virtually" join us.

Jason is videotaping the proceedings during this installation of MCU.

[Update, 11:30am: apparently, serving free coffee is illegal on the streets of Berkeley, so they have had to shut down the operation. 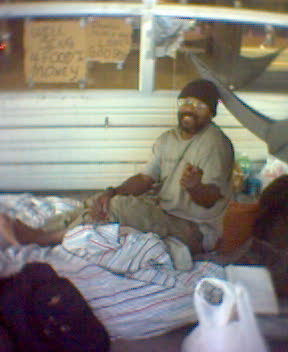 DeBraer is a man who makes his home under an overhang of the building formerly occupied by City Greens at the corner of NE 45th Street and 12th Ave NE. One time a month or so ago, he asked if I could help him with lunch as I walked by; I offered to pick up something for him at the Quiznos next door, and brought him some soup & salad (at his request). I've walked by many times since, and we often exchange greetings, but I had not offered to help him again (despite my desire to do so) ... until tonight.

Tonight as I passed him, he asked me to stop and read what he'd recently written in his notebook. There were several pages dated "7-12-04", and I read them with interest. The themes included sports, religion, politics and homelessness. Among the gems were a commentary on a local baseball player, to whom he posed the question "Are you willing to win, or do you simply want to endure?", and further on, the formula "Preparation + opportunity = success." I offered to buy him dinner, and he asked if I would pick him up three eggs sunny-side up, two baked potatoes with lots of butter & sour cream, and a steak from the International House of Pancakes around the corner, at NE 43rd Street and Brooklyn Ave. Upon my return, he sang me a song that he had composed (allowing me to snap his photo, shown above), with a great voice and deep soul. As we parted, he asked if I had any old books, specifically mystery novels, sports or autobiographies. I'll see what I can find at home.

As seems to be the case with almost every human being I get to know -- even a little -- there is more to DeBraer than initially meets the eye, or at least my eye. I was impressed with this man's writing and singing, and perhaps most of all, with the fact that this man knows what he wants and is not afraid to ask for it. I'm reminded of an earlier moblog I posted from Grand Illusion Cafe with a photo of a sign saying "Those who never want get what they never ask for" ... I suppose a corollary may be "Those who never ask get what they never wanted."

Catching up on Anne Galloway's wonderful blog, I discovered Fusedspace, an international open competition that invites participants who are exploring the nature of the relationship between new technologies and public space, particularly "groundbreaking interventions in the public domain." A quick perusal reveals many interesting entries in this contest; for now, I'll focus on one: Clonepointer:

Clonepointer is a coincidence attractor for the tube. With Bluetooth, you can store your appearance as keywords. Scanning lists on incoming trains, it tells you if Clones are around. If you decide to meet your Clone or use it as fashion-alarm is up to you.

Trevor Grooving on Stereolab at Ethereal