Back Cover at the Blue Onion Bistro 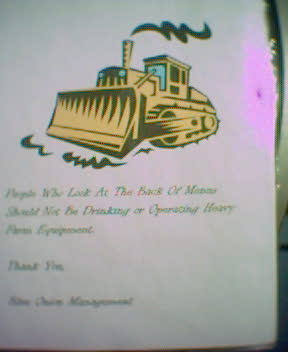 Hmmm, I captured & posted that photo earlier (at lunchtime) from my cameraphone. It looks a bit blurry, so here's a translation:
"People Who Look At The Back Of Menus
Should Refrain From Drinking Or Operating
Heavy Farm equipment.
Thank You.
Blue Onion Management."

The menu is eclectic, the decor is funky, and the food is very good (best burger I've had in Seattle, or almost anywhere else). We even got to dine alfresco on a beautiful day. Or perhaps I should say "wait alfresco": unfortunately, nearly an hour elapsed between ordering and finally being served any food. We later learned that this was due to a large party (13) that arrived ahead of us. There was no adjustment to the bill to compensate for our having been inconvenienced, and the server never apologized ... the cook (owner?) did apologize, but only after telling us that "next time" we'll know to be prepared for a wait if we see a large party at another table. Managing expectations is a key to success in any endeavor, and if we had been told up front about the potential delay, we could have planned accordingly, perhaps deciding to come back another day. As it is, I don't think there will be a "next time" for me at the Blue Onion Bistro.

This morning, I was on my way to Lighthouse Roasters in Fremont, when I passed Ethereal Cafe & CDs (note: web site is "under construction" but it can be found in the physical world at 254 NE 45th St, Seattle), which had a banner advertising fair trade Kenyan coffee, organic teas and vegetarian & vegan food. I decided to stop here instead of continuing on (will visit Lighthouse another day). Ethereal has a pair of chairs and a table for outdoor seating, but I ended up hanging out inside, chatting with Kelly, the proprietor, and Nicole, the barista. Ethereal has approximately 500 CD cases displayed in five 10x10 grids on the walls inside, each case labeled with a number that corresponds to its index on a CD jukebox (with headphones) and comfortable seating area nearby. Each grid has a theme -- Pop / Classical, Ambient / Electronica, Darkwave, Psyche / Prog, World / Improv -- and many of the titles were new to me (of course, as someone who just saw Bowling for Columbine, it's probably clear that I'm not exactly ahead of the curve when it comes to media consumption). I listened to -- and then purchased -- The Mirror Reveals: This Infinite Eye, which had an interesting look & sound, while enjoying some French-pressed coffee. I was thinking -- and talking with Kelly -- about how great it would be to create a way for the music playing in the loudspeakers (vs. headphones) to be somehow influenced by the people in the cafe at any given time ... reminiscent of the MusicFX system (which did this in a fitness center rather than cafe). I'll have to bring Trevor, who is thinking about similar possibilities with respect to usage scenarios for the Personal Server, next time I come here (or, actually "there" ... Ethereal does not have WiFi access [yet], so technically speaking, I'm "blogging about place" rather than "blogging in place").

I'm resuming my practice of blogging in place -- visiting [third] places and blogging about them while there. I'd actually taken some notes at some earlier places, following my initial foray to Cafe Solstice way back in February, and may post those retroactively (retrospectively?). Today, I'm sitting on the porch at Fremont Cafe (in the chair pictured on the right in the photo on their homepage), drinking a cup of Roaster's Blend from Lighthouse Roasters (another coffeehouse I want to visit soon), listening to KEXP 90.3 FM (which the barista, Precious, explains is a truly independent, eclectic, and commercial-free radio station that she often tunes in to while working the morning shift) and enjoying the people and atmosphere here on a cool, sunny morning.

While many people went to see Fahrenheit 9/11 this weekend, I finally got around to seeing Bowling for Columbine, the previous, Oscar-winning, documentary produced by Michael Moore. In the movie, Moore explores a number of possible explanations as to why there is so much more gun violence in the USA than in other countries, including the number of guns and exposure to various media (violent video games and music). Some of the oft-cited reasons do not appear very compelling on closer examination, e.g., it appears that we do not have more guns per capita or higher levels of exposure to violent games and music than other countries that enjoy much lower levels of gun violence. However, as highlighted in Moore's interviews with Barry Glassner, author of Culture of Fear: Why Americans Are Afraid of the Wrong Things, we do have a much higher level of exposure to violent media via news reporters and politicians in this country, both of whom have much to gain (with respect to gaining attention, market share and/or votes) by promulgating a culture of fear among the population. I do not know yet how much Moore's new film focuses on the promulgation of fear, but I suspect we will see ever more fear-mongering as we approach the US presidential election. As a side note, I find it curious that there are so many people -- and web sites -- out to discredit Moore; I don't follow film (or other media) closely, but I'm surprised at this level of effort, and reminded of other efforts to discredit people who have expressed views not welcomed by the current administration.

The Seattle Times reports that Bill Gates may soon start walking his talk and start blogging, following his promotion of the use of blogging and RSS for business during his keynote at the annual Microsoft CEO Summit last month. If he starts his own blog, he would be joining the ranks of [at least] hundreds of other Microsoft bloggers; interestingly, Scobleizer, one of the most widely read Microsoft bloggers, does not have any reference to this story. Perhaps the Seattle Times article is a bit premature -- it includes a qualifier from a Microsoft spokesman about "time permitting", and as has been recently pointed out, blogging can be time consuming.

I remember hearing a story a few years ago about Sun's CEO Scott McNealy promoting the use of open online calendars (i.e., making calendar entries publicly viewable, at least within the firm) throughout Sun, and yet keeping his own online calendar private ... which at the time made me wonder when McNealy would "get over" privacy. I don't know if the McNealy story is fact or fiction, but I do find it heartening whenever a CEO demonstrates a dimension of integrity by following his or her own precepts (I've also heard that Craig Barrett's "office" is a standard-sized cubicle at Intel, but have not yet been able to independently verify this). If Gates does start blogging, I wonder who will be on his blogroll ...

Surfing the Net ... from a Surfboard

BBC News reports on an Intel innovation: a tablet PC, augmented with solar panels and a video camera, embedded in a surfboard. The surfboard was to be showcased by professional surfer Duncan Scott at the Intel Goldcoast Oceanfest in North Devon, UK, last weekend.

Some people bring their laptops to the beach, and there are more and more harbors (and unsuspecting shoreside homes) offering WiFi access, but this is the first I've heard of WiFi access via surfboard. The main benefit of this innovation is presumably to provide a surfer's-eye view of the action, one of the more interersting examples of things one can view on the net. I suppose it could be of some benefit to the surfers themselves, waiting for the next big wave, particularly on days when the swell is not so swell.

John Sherry sent me a Yahoo News article about BEDD, a Bluetooth mobile phone application launched recently in Singapore that allows users to discover things about and interact with the other BEDD-enabled phone users in their immediate vicinity. The application brings together a number of proximity-based features that have been explored in separate applications (e.g., mobile dating, alerts and messaging) plus some new features (e.g., mobile proximity-based advertising). The article reports 1000 users in the first month, which is far short of what I would expect to be the critical mass to make this successful, but the application sounds promising.

Julian Crandall Hollick, in a story called "Life in India: Dawn on Parsee Gulli" on NPR's Weekend Edition Sunday, described an experience -- a series of experiences, really -- that reminds me of the Familiar Stranger phenomenon. Hollick talks about walking past a man standing outside his apartment each day, how the two would exchange glances (or stares), and the tension regarding who would break the ice. When one day he passes at a different time, the man is not there, but they chance to meet each other when both are on the street; they exchange wordless, friendly greetings, breaking the ice. Interestingly, it does not appear that this breaking of the ice resulted in subsequent friendly exchanges; in fact, in some cases the opposite appears to have happened (the man at the house sometimes turns his back on Hollick when he passes by after their "meeting" in the street). I find this counter-intuitive, and very different from my own experiences in moving beyond familiar strangeness, but I would not be surprised if my intuitions & experiences are more the exception than the rule.

Posted at 09:38 AM in Making Connections, Places and Spaces | Permalink | 0 comments

Democracy Now! (more than ever)

Any regular NPR listeners who are looking for an alternative to the relentless, uncritical review(s) of the Reagan years this week may want to check out Democracy Now! In the Seattle area, the show is aired from 6-7 am and 5-6 pm on KBCS (91.3 FM); other stations and times can be found on the Democracy Now! web site. Although I didn't hear it on the radio, an article on their special "Remembering the Dead" section talks about "The Saddam in Rumsfeld's Closet." It appears that, at least during the Reagan administration, Donald Rumsfeld was more concerned about the threat of Islam than the threat of weapons of mass destruction.

NPR aired a report on "Venezuelan Opposition Seeks Recall Vote on Chavez" tonight on All Things Considered. Seems that the names -- and national IDs -- of many of the 2.5 million Venezuelans who have signed a petition for a referendum to recall President Hugo Chavez have been made available to a variety of government agencies, and that many of the petitioners are experiencing difficulties in finding (or keeping) government jobs with or seeking services from government agencies.

I wonder whether this has happened -- or could happen -- in the USA. I'm reminded of the recent local controversy about potential abuses paid signature gatherers, and the national controversy over fundrace.org, a web site that allows users to search for the names, addresses and contribution amounts of people who have contributed money to the USA presidential candidates. Although it is common for victorious elected officials to reward or punish people and organizations based on the who they financially supported during the election, it seems undemocratic (to say the least) to punish people who have signed a petition to place a measure on a ballot.